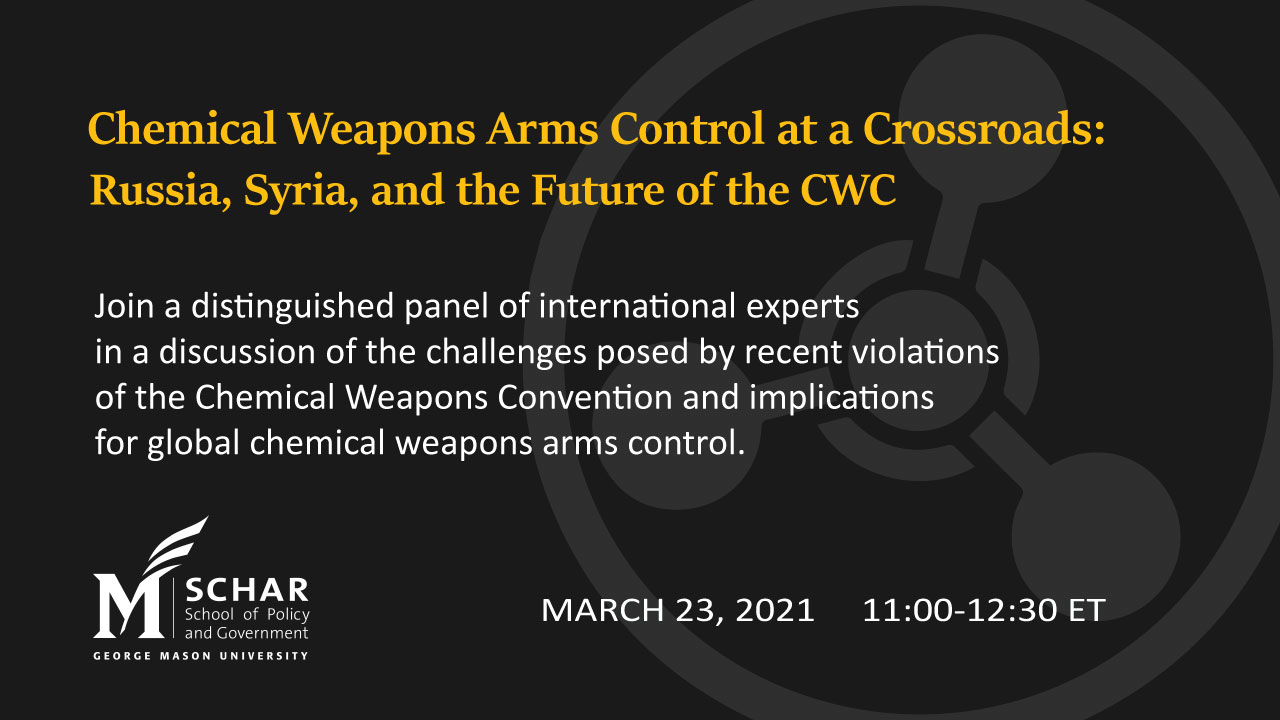 A guest panelist will join Schar School Professor Gregory Koblentz to discuss the challenges posed by the current Russian and Syrian chemical weapons programs, the status of international efforts to strengthen accountability for use of chemical weapons, and the implications for global chemical weapons arms control.

Hanna Notte is a Senior Non-Resident Scholar with the James Martin Center for Nonproliferation Studies (CNS), currently based in Berlin, and focusing on arms control and security issues involving Russia, the Middle East, their intersection, and implications for US/European strategy and policy. Prior to that, she was a Senior Political Officer with The Shaikh Group, a non-profit political consultancy focused on informal diplomacy and Track II mediation in the Middle East. Dr. Notte wrote her DPhil on US-Russian cooperation in the Middle East at the University of Oxford (2017, St. Antony’s College), from where she also received an MPhil in International Relations in 2014. She has held visiting research positions with the Institute of Oriental Studies in Moscow, the Carnegie Moscow Center, the IISS Middle East office in Manama and the Konrad-Adenauer-Foundation’s Syria/Iraq office in Beirut. She is a German national who speaks Russian, Arabic, and French.

Dr John R Walker was Head of the Foreign and Commonwealth Office’s Arms Control and Disarmament Research Unit (ACDRU) from December 2014 to May 2020 when he retired from the FCO. He joined ACDRU in March 1985. John’s main focus was on the Biological and Toxin Weapons Convention (BTWC), the Chemical Weapons Convention (CWC), the Comprehensive Nuclear Test Ban Treaty (CTBT), and the UN Secretary-General’s Mechanism for investigating allegations of CBW use. In addition, his work also included UK nuclear weapons and arms control history and nuclear disarmament verification. He is currently a Senior Associate Fellow at the European Leadership Network and a Senior Associate Fellow at the Royal United Services Institute.

Una Jakob is a research associate at the Peace Research Institute Frankfurt (PRIF) in Germany who specialises in arms control, disarmament, and non-proliferation, with a special focus on chemical and biological weapons. Her recent publications include Countering the Use of Chemical Weapons in Syria: Options for Supporting International Norms and Institutions, written in 2019 for the EU Non-Proliferation and Disarmament Consortium, and WMD Compliance and Enforcement in a Changing Global Context, co-authored with Carmen Wunderlich and Harald Müller for UNIDIR (2021, forthcoming). She holds a PhD in Political Science from Frankfurt University.