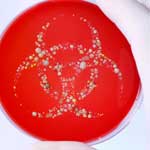 Days after the LA Times published the article, Alexander Garza, Chief Medical Officer for the Department of Homeland Security (DHS), responded with The Truth About BioWatch: The Importance of Early Detection of a Potential Biological Attack.