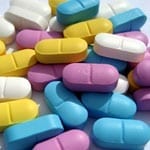 The World Health Organization estimates that at least 10 percent of the drug supply in developing countries consists of counterfeit medicines, causing thousands of deaths every year. Researchers at Saint Mary’s College have developed an inexpensive method that accurately detects fake pain-relievers, paving the way for detection of a number of drugs similarly adulterated.

The test consists of chemically treated paper the size of a business card. To check for counterfeit ingredients, a person simply swipes the pill over the paper and dips the paper in water. Color changes on the paper indicate suspicious ingredients.

The research team focused on a brand-name acetametaphin marketed abroad called Panadol, which is one of the most-frequently faked medicines in the world. The team successfully validated the test on over 500 pills, including controls with fake ingredients added by researchers.

Their results were recently presented at the 244th National Meeting & Exposition of the American Chemical Society, the world’s largest scientific society.

Many life-saving medicines are adulterated with similar excipients, and Panadol’s active ingredient itself is a counterfeit component in these medicines. As such, this paper test which detects Panadol is the starting point for screening other drugs such as antimalarials and antibiotics.

“Panadol long has been among the most common, standard pain-relieving drugs counterfeited around the world,” states Toni Barstis, Ph.D., chemistry professor and leader of the research team at Saint Mary’s College. “But the problem has taken on a troubling new dimension. In the past, you could just look at the labeling and packaging and know if it was counterfeit. Now, they do such a good job with the package design it’s hard to determine whether it’s a package of the genuine medicine or a fake that contains no acetaminophen or even ingredients that may be harmful.”

In addition to lacking the active ingredient, counterfeit medicines may harm people by containing ingredients that are potentially toxic. Officials blame crime rings, which profit from selling at full-price pills that contain plaster of Paris, baking soda or other inexpensive ingredients.

Compounding the counterfeit problem is the difficulty in testing medications for authenticity in resource limited settings. This new test for Panadol, which takes less than 10 minutes, can be done by consumers and also can be used by personnel in government regulatory agencies, clinics and hospitals.

The College has applied for a patent for the test. The team is now working in collaboration with researchers at the University of Notre Dame to develop similar tests for identification of counterfeit antibiotics, anti-malaria drugs, and Tamiflu.