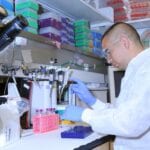 A Naval Medical Research Center (NMRC) researcher was awarded a Bill & Melinda Gates Foundation Grand Challenges Exploration Opportunities Grant. Lt. Robert Gerbasi received a $100,000 grant with a potential follow-on grant of up to $1 million for his project that focuses on targeting the liver stage of malaria as a major component for a possible vaccine for deployed warfighters.

“A military conflict or humanitarian crisis can arise in a malaria endemic area of the world at any time,” said Gerbasi. “If our warfighters are not protected from malaria they will be out of the fight pretty fast. We want to fight our adversary, not malaria and our adversary. I hope that over the long term this research identifies a new class of vaccine targets that can be used to protect service members and people who live in malaria endemic areas of the world.”

The U.S. Military Malaria Vaccine Program (USMMVP) has aggressively pursued vaccine approaches to protect the warfighter from malaria. The Navy side of the USMMVP focuses on developing a vaccine that employs cell-mediated immunity by manipulating a specific cell type, the CD8T cell, to find and kill liver stage parasites.

Infected mosquitoes inject malaria parasites when they bite an individual. The parasites travel to the liver, invade liver cells, multiply and develop into thousands of parasites that burst out of the liver cells and into the bloodstream and infect red blood cells. During the liver stage, malaria presents pieces of itself, in the form of short peptides, on the surface of the liver cells.

“Our goal is to identify small pieces of malaria peptides,” said Gerbasi. “Those peptides would serve as excellent vaccine candidates to train an individual’s immune system to recognize and kill infected liver cells.”

During the first six months of the project, Gerbasi and his team will work to identify thousands of peptides on the surface of infected liver cells. In the second phase of the project, they will identify the peptides that are immunogenic. In the final phase, Gerbasi will prepare the findings for presentation and publication.

“If things go well with the first Grand Challenges project, I will be placed on a short list of investigators eligible for a second Grand Challenges award worth $1 million,” said Gerbasi. “I was pretty excited to have this proposal selected. The NMRC research program has an outstanding team of entomologists, microbiologists, biochemists and molecular biologists all working toward the goal of a vaccine. I am proud to be a member of the team.”

The primary objective of the Navy malaria program is to develop a vaccine that kills the parasite during its first few days of development in the liver, before it breaks out into the blood. If this approach is successful, it will prevent the clinical manifestation of malaria, which occurs only in conjunction with blood-stage infection and not with the liver stage. Such a vaccine would benefit deployed military personnel as well as travelers and other populations. At the same time, the program is investigating vaccines that would target blood-stage infection to limit the severity of symptoms associated with this stage. Both liver and blood-stage vaccines, if deployed in endemic areas, could alleviate much of the suffering caused by this parasite in tropical countries.