Scripps Gets New Look at Machinery of Flu Virus Replication 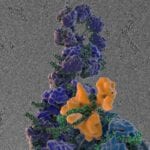 Scientists at The Scripps Research Institute have made a major advance in understanding how flu viruses replicate within infected cells. The researchers used cutting-edge molecular biology and electron-microscopy techniques to “see” one of influenza’s essential protein complexes in unprecedented detail. The images generated in the study show flu virus proteins in the act of self-replication, highlighting the virus’s vulnerabilities.

The work focuses on influenza’s ribonucleoprotein (RNP), which contain the virus’s genetic material plus the special enzyme that the virus needs to make copies of itself. At the core of any influenza virus lie eight RNPs, tiny molecular machines that are vital to the virus’s ability to survive and spread in its hosts. Each RNP contains a segment—usually a single protein-coding gene—of the RNA-based viral genome. This viral RNA segment is coated with protective viral nucleoproteins and has a structure that resembles a twisted loop of chain.

The free ends of this twisted loop are held by a flu-virus polymerase enzyme, which handles the two central tasks of viral reproduction: making new viral genomic RNA, and making the RNA gene-transcripts that will become new viral proteins.

Getting such detail has been a real challenge. One reason is that flu RNPs are complex assemblies that are hard to produce efficiently in the lab. Flu polymerase genes are particularly resistant to being expressed in test cells, and their protein products exist in three separate pieces, or subunits, that have to somehow self-assemble. Until now, the only flu RNPs that have been reproduced in the laboratory are shortened versions whose structures aren’t quite the same as those of native flu RNPs. Researchers also are limited in how much virus they can use for such studies.

The team develop a test-cell expression system that produced all of the protein and RNA components needed to make full-length flu RNPs. “We were able to get the cells to assemble these components properly so that we had working, self-replicating RNPs,” said Robert N. Kirchdoerfer, a first author of the study.  Eventually the team was able to purify enough of these flu RNPs for electron microscope analysis at Scripp’s Automated Molecular Imaging Group.

“Structural studies in this area had stalled because of the technical obstacles involved, and so this is a welcome advance,” said Ian A. Wilson, the Hansen Professor of Structural Biology at Scripps and senior author of the report with Professors of Cell Biology Bridget Carragher and Clint Potter. “The data from this study give us a much clearer picture of the flu virus replication machinery.”

The new flu RNP model highlights some viral weak points. One is a shape-change that a polymerase subunit—which grabs viral RNA and feeds it to the polymerase’s active site on a second subunit—has to undergo during viral gene transcription. Another is key interaction between the polymerase and viral nucleoproteins. Flu RNPs are long and flexible, curving and bending in electron microscope images; and thus the structural model remains only modestly fine-grained. “You wouldn’t be able to design drugs based on this model alone,” said Kirchdoerfer, “but we now have a much better idea of how flu RNPs work, and that does suggest some possibilities for better flu drugs.”

Aside from its importance in ordinary infections, the flu polymerase contains some of the key “species barriers” that keep, for example, avian flu viruses from infecting mammals. Mutations at key points on the enzyme have enabled the virus to infect new species in the past. Researchers are eager to know the precise details of how the flu polymerase and the rest of the RNP interact.

The study “Organization of the Influenza Virus Replication Machinery” appeared online in Science Express on November 22, 2012. The research was funded in part by grants from the National Institutes of Health and the Joint Center for Innovation in Membrane Protein Production for Structure Determination. (Source: Scripps Research Institute)