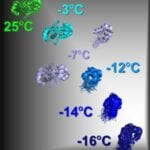 A team of researchers led by the Max Planck Institute for Biophysical Chemistry and the German Center for Neurodegenerative Diseases is the first to image the various stages of a protein’s unfolding, which may lend valuable insight to treatment of a number of diseases.

Protein folding and unfolding are crucial for a range of biological phenomena and human disease states. Conditions such as Alzheimer’s and Parkinson’s, for example, are caused by misfolded proteins that form insoluble clumps in the brain and eventually destroy the nerve cells. Understanding how proteins achieve or lose their three-dimensional structure is one of the most important questions in the biological sciences because proteins can only perform their functions properly if their amino acid chains are correctly folded.

But what exactly happens when proteins fold or unfold was previously nearly impossible to investigate. With heat and pressure, proteins easily lose their shape – and thus their function. Such methods are not suitable for directly observing their unfolding process, as the intermediate forms that occur are too transient.

By combining low temperatures and NMR spectroscopy, the scientists visualized seven intermediate forms of the CylR2 protein while cooling it down from 25°C to – 16°C. This particular protein was chosen because it is made of two identical subunits, which the team believed would make it easier to visualize.  CylR2 is also a key protein for toxin production in Enterococcus faecalis, a pathogen frequently encountered in hospitals where it particularly jeopardizes patients with a weak immune system.

Their results show that the most instable intermediate form plays a key role in protein folding and serves as a trigger point. The scientists’ findings may contribute to a better understanding of how proteins adopt their structure and misfold during illness.

“If a protein is slowly cooled down, its intermediate forms accumulate in larger quantities than in commonly used denaturation methods, such as heat, pressure, or urea. We hoped that these quantities would be sufficient to examine the intermediate forms with nuclear magnetic resonance (NMR) spectroscopy,” said Markus Zweckstetter, head of the research group.

The research was conducted in collaboration with the Polish Academy of Sciences in Warsaw and the University of Warsaw. The study was published this week in Nature Chemical Biology: Cold denaturation of a protein dimer monitored at atomic resolution.

Image: “Snapshot” of the unfolding of the CylR2 protein from Enterococcus faecalis. If the protein is cooled from 25°C to -16°C, it successively breaks down into its two identical subunits. The latter are initially stable, but at -16°C they form an instable, dynamic protein form, which plays a key role in folding.