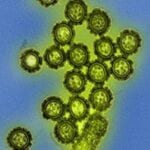 A new study by the National Institute of Allergy and Infectious Diseases (NIAID) shows that excessive early immune responses contribute to deaths caused by certain influenza viruses. Scientists found that reducing the number of inflammatory immune cells in the lungs of mice increased the animals’ survival after infection with a virulent flu strain, offering potential new strategies for flu treatment.

Influenza viruses infect cells of the body’s respiratory system and rapidly multiply, causing damage to lung tissue.  However, the virus itself is not always to blame for the severity of flu symptoms. The immune system’s reaction to flu infection sometimes causes inflammation and additional lung damage.

Although most influenza deaths occur in those with weakened immune systems, such as the elderly, certain flu viruses can cause death in young, healthy adults. Some studies have suggested that overreaction of the immune system contributes to the lethality of these highly virulent strains. Other work has shown that suppressing immune responses to the flu increases risk of death.

Researchers led by NIAID’s Laboratory of Systems Biology infected mice with an influenza strain that mimics the effects of the H1N1 virus that caused the 1918 flu pandemic. In collaboration with researchers from the National Institute of Arthritis and Musculoskeletal and Skin Diseases, they assessed the animals’ immune function at the gene, cell, and tissue levels and compared it to those of healthy mice and mice infected with a non-lethal H1N1 strain.

Their initial studies suggested that infection-fighting immune cells called neutrophils may influence whether flu infections are deadly or not. Further analysis showed that neutrophils began to accumulate in the lungs of mice infected with the lethal flu strain within two days of infection—several days before the animals grew severely ill. The researchers found that the neutrophils release pre-formed proteins, such as the cytokine IL-1, and produce other chemicals that attract more neutrophils to the infection site in a potentially explosive amplification process. They predicted that blunting this amplification process might protect the mice from lethal immune damage.

The study provides direct evidence in mice that damaging inflammation caused by the immune system’s initial response to H1N1 infection can be a major contributor to death. This work builds on previous studies by other investigators that revealed a correlation between early immune responses and the disease-producing capacity of viruses. The new findings raise the possibility that other infectious diseases that cause life-threatening lung injury, such as H7N9 influenza and SARS, might elicit similar immune reactions.

Another novel finding from this study is that neutrophils continually produce IL-1. This raises the question of whether drugs that blunt the function of IL-1 might help limit neutrophil activation and subsequent lung damage in people with the flu while preserving the essential immune functions of IL-1. A few IL-1 inhibitors currently are FDA-approved to treat autoinflammatory diseases.

The researchers report their results in this week in the journal Cell: A systems analysis identifies a feed-forward inflammatory circuit leading to lethal influenza infection.