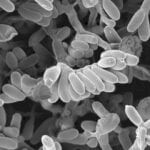 An antibiotic has been found to stimulate its own production, a discovery which could make it easier to scale up antibiotic production for commercialization.

Scientists Dr. Emma Sherwood and Professor Mervyn Bibb from the John Innes Centre (JIC) were able to use their discovery of how the antibiotic is naturally produced to markedly increase the level of production. Their findings have been published in PNAS.

“We have shown for the first time that an antibiotic with clinical potential can act as signaling molecule to trigger its own synthesis,” said Professor Bibb.

The antibiotic called planosporicin is produced by a soil bacterium called Planomonospora alba. When nutrients become limited, a small amount of the antibiotic is produced. The antibiotic is then able to trigger a mechanism that coordinates its own production throughout the bacterial population resulting in high levels.

“A frequent stumbling block in developing a natural product for commercialization is being able to provide enough material for clinical trials,” said Professor Bibb.

“Our work shows with the right understanding it is possible to increase productivity very dramatically in a targeted and knowledge-based manner.”

With knowledge of this signaling mechanism in hand, the scientists were able to increase production by over-expressing two positively acting regulatory genes and deleting one that acts negatively. Planosporicin is similar to the antibiotic NAI-107 that is about to enter clinical trials for Staphylococcus aureus (MRSA) and vancomycin-resistant enterococci (VRE) infections. The knowledge gained from this study is being used to increase NAI-107 production.

Commercial manufacturers of antibiotics may be able to use the results to reduce production times and therefore reduce costs. Bacteria often have to be grown for days and sometimes weeks before they start to make effective amounts of an antibiotic. Sherwood and Bibb were able to trigger production essentially from the beginning of growth.

The work was funded through JIC’s core strategic grant from BBSRC. Read the study at PNAS: Antibiotic planosporicin coordinates its own production in the actinomycete Planomonospora alba.