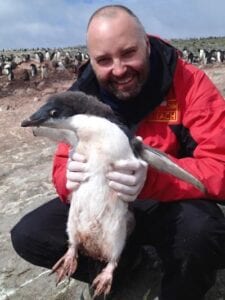 An international team of researchers has, for the first time, identified an avian influenza virus in a group of Adélie penguins from Antarctica. The virus, found to be unlike any other circulating avian flu, is described in a study published this week in mBio.

While other research groups have taken blood samples from penguins before and detected influenza antibodies, no one had detected actual live influenza virus in penguins or other birds in Antarctica previously, says study author and Associate Professor Aeron Hurt, PhD, a senior research scientist at the WHO Collaborating Centre for Reference and Research on Influenza in Melbourne, Australia.

For the study, Hurt and colleagues collected swabs from the windpipes and posterior openings of 301 Adélie penguins, and blood from 270 of those penguins, from two locations on the Antarctic Peninsula: Admiralty Bay and Rada Covadonga. The samples were collected during January and February 2013.

Using real-time reverse transcription-PCR, the researchers found avian influenza virus (AIV) genetic material in eight (2.7%) samples, six from adult penguins and two from chicks. Seven of the samples were from Rada Covadonga. The researchers were able to culture four of these viruses, demonstrating that live infectious virus was present. On further analysis of the samples, the researchers found all viruses were H11N2 influenza viruses that were highly similar to each other.

But when the researchers compared the full genome sequences of four of the collected viruses to all available animal and human influenza virus sequences in public databases, “we found that this virus was unlike anything else detected in the world,” says Hurt. “When we drew phylogenetic trees to show the evolutionary relationships of the virus, all of the genes were highly distinct from contemporary AIVs circulating in other continents in either the Northern or Southern Hemisphere.”

Four of the gene segments were most closely related to North American avian lineage viruses from the 1960s to 1980s. Two genes showed a distant relationship to a large number of South American AIVs from Chile, Argentina and Brazil. Using a molecular clock to incorporate the evolutionary rate of each AIV gene segment, the researchers estimated that the virus has been evolving for the past 49 to 80 years without anyone knowing about it. Whether this evolution has occurred exclusively in Antarctica is currently unknown, Hurt says.

Additional experiments found that 16% of penguins (43 of 270) had influenza A antibodies in their blood, and that the newly identified virus is likely to be exclusive to birds, as it did not readily infect a group of ferrets used as a test to see if the virus could infect mammals.

While the virus did not cause illness in the penguins, the study shows that “avian influenza viruses can get down to Antarctica and be maintained in penguin populations,” Hurt says. “It raises a lot of unanswered questions,” including how often AIVs are being introduced into Antarctica, whether it is possible for highly pathogenic AIVs to be transferred there, what animals or ecosystems are maintaining the virus, and whether the viruses are being cryopreserved during the winters.

The fieldwork was funded by the Instituto Antártico Chileno (Chilean Antarctic Institute) and the analysis was conducted at the WHO Collaborating Centre for Reference and Research on Influenza, which is supported by the Australian Government Department of Health.

Read the paper at mBio: Detection of Evolutionarily Distinct Avian Influenza A Viruses in Antarctica.