Watering eyes. Blistering skin. Convulsions. These are all symptoms of a chemical weapons attack that can lead to imminent death. The lethality of such attacks, most recently the one in Syria in August 2013, can send tremors across the globe.

But for U.S. Army soldiers, chemical weapons present a real danger on the battlefield, and one that requires the most advanced technology to keep them safe.

Scientists and researchers at the U.S. Army Edgewood Chemical Biological Center (ECBC) have never stopped working toward better protective equipment, including its iconic gas mask. Now developed to meet evolving chemical and biological threats, ECBC engineers have fielded the next generation M50 mask to Army soldiers stationed in Japan and Korea. The Army is now in the process of fielding more than a million of these masks to all of the Armed Service branches.

“I noticed the difference between the M50 and the old M40 mask as soon as I put it on,” said Sgt. James Tuthill, a training NCO stationed at the Marine Corps Air Station Cherry Point in North Carolina. “I train Marines to be prepared for chemical, biological and radiological hot zones, and this mask provides them with better visibility, easier breathing and greater comfort wearing it. And on top of all that, it just looks cool.” 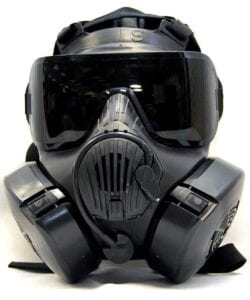 Looking cool may give the mask some style points, but its improved functionality is what enable soldiers to keep calm under pressure and execute their missions. Instead of goggles and just one filter traditionally found on its predecessor, the M40 mask, the M50 mask has a wrap-around visor and symmetrical filters on each side. It also has a silicon and butyl face piece that is flexible enough to fit all face sizes from the second to the 98th percentile of the adult population. These design enhancements make breathing 50 percent easier than the legacy M40 mask. It costs $280 to manufacture the M50 mask, its filters, a mask carrier and a decontamination kit.

The new mask is 15 years in the making. ECBC’s Joint Service General Masks (JSGM) Team has spent more than a decade developing an advanced, ergonomic and effective respiratory protective mask that can be used across the U.S. military for the defense of chemical agent threats. Soldiers can now change filters in a threat environment and the single lens across the face allows for a wider area of view for binocular use or other sighting devices. With increased comfort, improved visibility and better hydration, the new mask is considered one of the most heavily tested pieces of personal protective equipment developed by the U.S. Department of Defense.

“We have been involved with every step of the design, validation, and testing and modification process. [We were also involved in] filter testing and product quality and deficiency reporting,” said Akanksha Raja, ECBC systems and logistics engineer.

On March 12, the JSGM Team traveled to Japan and Korea on a seven-week-long campaign to field masks at six different Army sites. By the end of April, more than 39,000 masks had been successfully inspected and fielded to soldiers in the region. The mask had been outfitted across the services since 2008, beginning with the Air Force, which has already received 345,448 M50 masks. The Navy has received 274,333 masks and the Marine Corps has received 131,289. By 2019, the Army expects to have fielded 1,245,978 masks, and the campaign in Korea and Japan is just one of many that will occur.

A typical fielding includes the team arriving onsite, where an inspection is conducted for random sampling of five percent of the inventory to ensure quality of the shipment. Masks are then staged by commands in advance of the training sessions, during which 20-25 CBRNE specialists spend four hours training the soldiers using a “train-the-trainer” style that includes instruction on how to properly use and store the mask.

“We also authored the technical manual and after the training we remain a touch point for the soldiers to answer any questions they have about the training, usage or storage of the mask,” Raja said.

ECBC’s commitment to not only developing the most advanced protective gear, but training the soldiers who use it, is part of the Center’s critical mission in chem-bio defense. The lethality of chemical weapons is a grave danger to the men and women serving in uniform on behalf of the country, and even the tiniest drop of agent could prove fatal. For example, a lethal dose of chlorine is only 0.2mm, which is smaller than the eye of Abraham Lincoln on the U.S. penny. 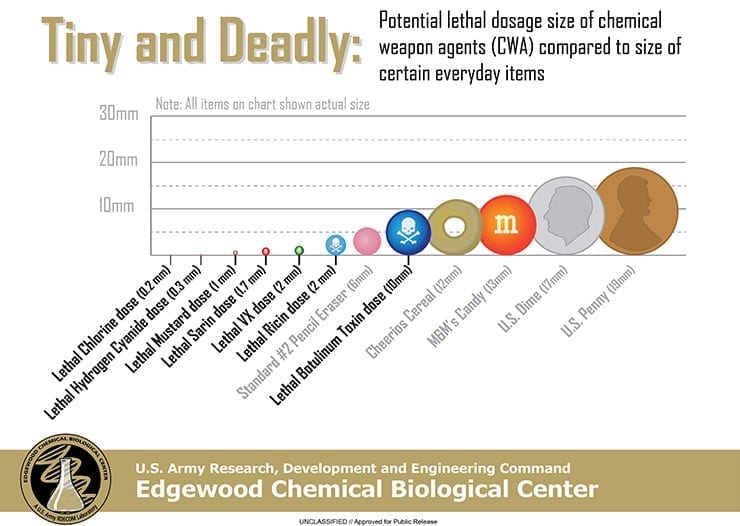 Even as the M50 is fielded, ECBC continues to improve the most important piece of protective gear the U.S. Army has ever issued. It is currently designing a next-generation respirator that is lighter, smaller and has a built-in air flow from the nose cup to the eye cavity to keep the face cooler. Physiological monitors and sensors will control fan speeds for the air based on the breathing demands of the user. The most advanced communications technology will also be integrated into the mask.

Keeping the end user in mind is what will keep the warfighter safe in the most challenging theater conditions. ECBC has a long-standing history of chemical weapon defense, and is leading the way on soldier protection. The expertise and state-of-the-art facilities enable ECBC to safely handle the most lethal substances for research defense purposes; it’s most rewarding mission is developing gear that helps bring soldiers home.