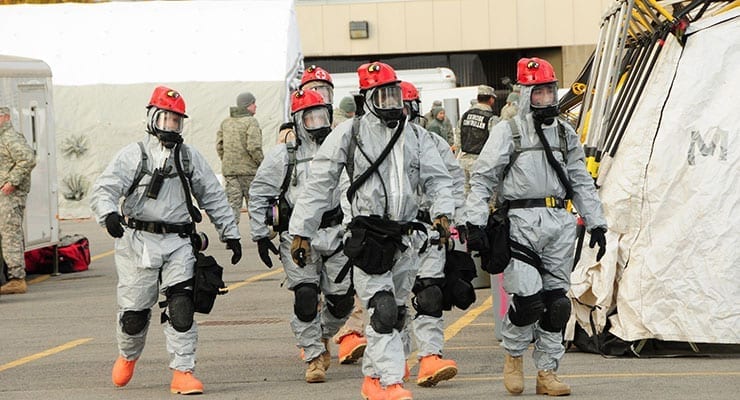 Cold November winds hovering near freezing and snow flurries did little to hinder the hundreds of Guardsmen and women who donned hazardous material suits in a simulated CBRN environment to work through the challenges of the training site’s rubble pile and operate a decontamination line and medical triage site.

The organization, known as a National Guard Homeland Response Force, exercised its ability to alert, mobilize and deploy to an incident site in support of civil first responders dealing with a CBRN disaster.

Led by the command and staff of the New York Army National Guard’s 27th Infantry Brigade Combat Team, based in Syracuse, N.Y., the task force includes specially trained Soldiers and Airmen prepared to don protective gear and rescue victims of a CBRN event, provide them with decontamination and medical triage for evacuation into the civilian medical system.

“This is our first collective training event of the year since our validation exercise in the spring,” noted Capt. Justin Simon, commander of the CBRN task force Search and Extraction element, Company A of the 427th Brigade Support Battalion based in Rochester. “We’ll have another opportunity to train collectively again next spring.”

The training included simulated response efforts at the Cheektowaga Emergency Training Center centered around the CBRN task force led by the 2nd Squadron, 101st Cavalry (Reconnaissance, Surveillance and Target Acquisition), a mission command element from the 27th Infantry Brigade Headquarters based away from the simulated hazard site at the Niagara Falls Air Reserve Center and a supporting joint task force headquarters in support from the New York Army National Guard state armory in Buffalo led by the 153rd Troop Command Headquarters.

“My goal specifically is to conduct more ropes training in our search and extraction teams,” said Simon, from Syracuse, N.Y.

The collective training brings together all aspects of saving lives, but the critical first step is with the engineers on the Search and Extraction team, said Sgt. 1st Class Justin Kaier of Lockport, N.Y.

“It’s about getting in there, getting them out and getting them through decon as quickly as we can,” Kaier said.

Each component of the HRF and its largest component, the CBRN task force, train separately throughout the year on their individual jobs, explained Maj. Joseph Merrill of Binghamton, N.Y., and executive officer of the 2nd Squadron, 101st Cavalry and the CBRN task force.

The benefit of a full-scale exercise like the one at Cheektowaga, Merrill said, is the putting all the pieces together and work out the wrinkles of command, communication and logistics of the diverse missions in a very demanding CBRN environment.

“The exercise is about getting ready to perform this mission and save lives, in case this ever happens for real,” said Capt. Thomas Beach, the CBRN task force communications officer with the Headquarters Troop, 2nd Squadron, 101st Cavalry based at Niagara Falls.

“The scenario is a chemical spill that brings us to the scene and we have to respond,” Beach, a Buffalo resident, said in describing the exercise.

The cold weather has its own unique demands on the team, explained Merrill. While military personnel wearing hazmat suits drew some benefit of the colder temperatures while in the protected suits that often limit their operation on warmer days, members of the team putting up and operating the decontamination line and medical triage worked in very cold conditions to establish power, water and tentage for the teams.

“It’s supposed to be inconvenient,” Kaier said. “That’s how it (training) works.”

The Homeland Response Force for FEMA Region II is one of ten units established by the Department of Defense to assist state officials and local first responders in dealing with chemical, biological, radiological and nuclear (CBRN) attacks and incidents across the United States.

The 10 HRFs align with Federal Emergency Management Agency regions to allow for closer and more familiar contact with civilian responders. The National Guard forces also provide a greater responsiveness to local authorities due to their closer geographical locations.

“We’re trying to bring as many of our emergency management leaders out to see and work with the Guard during the whole exercise,” explained Dan Neaverth, Commissioner of the Erie County Department of Emergency Services. “Starting on Wednesday we were able to work with the CST (Civil Support Team) and through the rest of the exercise we’ll have deputy commissioners work to replicate the unified command that would be here for an incident like this.”

The emergency managers were joined by dozens of Soldiers simulating incident victims with moulage and guidance to express symptoms of exposure to the chemical hazards.

“We make it as realistic as possible to get the most out of the situation,” Beach said. “There are roleplayers who simulate the victims that have mock injuries and show symptoms.”

“That experience is everything for us,” Beach explained about the lessons learned in training.

In total, the HRF employs more than 600 service members in units across New York, New Jersey, Puerto Rico and the U.S. Virgin Islands. 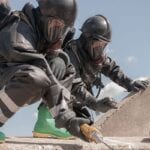 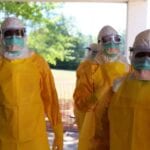