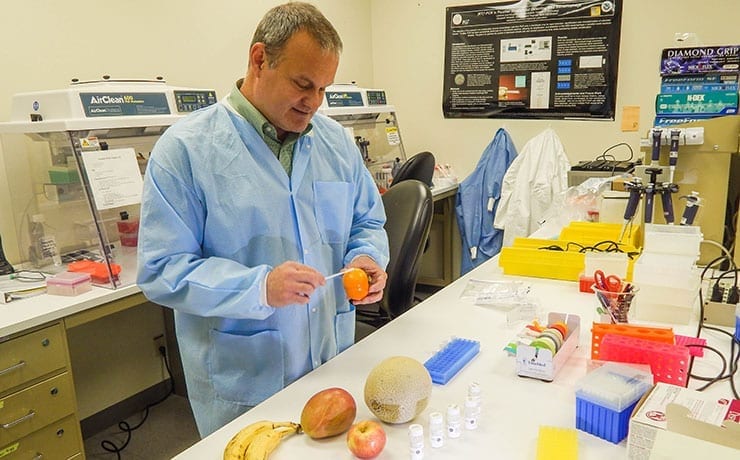 LLNL physical chemist demonstrates how the product can be applied to food to identify it down the food chain. Credit: Julie Russell/LLNL

Lawrence Livermore National Laboratory (LLNL) researchers, in collaboration with the startup DNATrek, have developed a new method to accurately trace contaminated food back to its source.

LLNL designed the technology, known as DNATrax, which are particles comprised of sugar and non-living and non-viable DNA that can serve as an invisible barcode. It’s an odorless and tasteless substance that’s been approved by the Food and Drug Administration as a food additive, safe for consumption.

DNATrax was originally designed to monitor airflow patterns inside buildings and other facilities to plan safe evacuation routes and outside to determine routes that biological agents travel. To do this, tiny DNATrax particles are released as an aerosol and carried by the airflow inside a building. The particles are collected from the interior or exterior by swipes or filters, in a manner similar to forensic investigations.

Using a PCR Thermo Cycler, a common instrument that serves as a photocopier for DNA, the data are analyzed to provide valuable information that can be used to improve the ability to protect lives if a harmful biological agent is released intentionally or accidentally.

But researchers found that this microscopic “barcode” can also be sprayed on food at the farm or processing plant.

“One of the unexpected capabilities from DNATrax was being able to apply it to food products,” said George Farquar, an LLNL physical chemist who led a team of researchers that developed the technology for biosecurity applications. “You can spray it on food products in the field to identify and track the source of the food.”

If the food turns out to be contaminated when it reaches the store or dinner table, DNATrax can be lifted off the food and analyzed in the lab using polymerase chain reaction (PCR) to quickly identify the food’s source. A tainted apple, for example, can be traced back to the orchards by DNATrax to determine when it was picked, who picked it and potentially which tree it came from.

About 128,000 Americans are hospitalized each year from contaminated foods, according to CDC statistics. Beyond health concerns, foodborne illnesses cost the food industry nearly $70 billion annually in the form of recalls and other related costs, according to the FDA.

In the future, Farquar hopes DNATrax can be used to assist in training to determine if personal protective equipment (PPE) — such as hazmat suits used by emergency responders and health care workers to treat Ebola patients — have been breached. The DNA particles can be applied to the PPE’s exterior, and if contaminants appear on a person’s skin, then a breach has occurred.

“This is important because current detection methods give a false impression of PPEs working properly,” Farquar said. 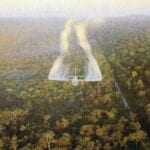