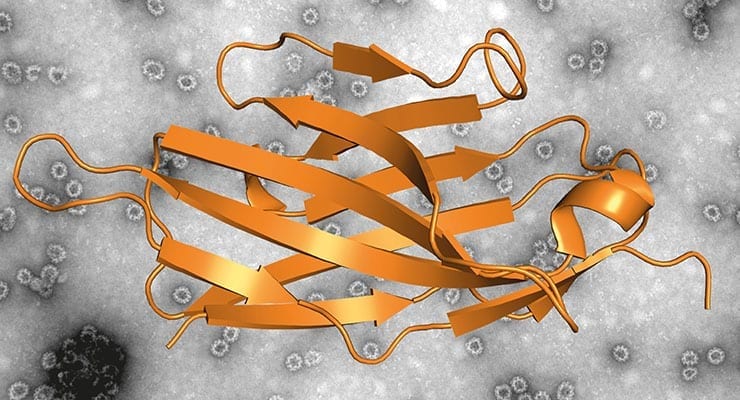 Electron micrograph of norovirus virus-like particles (VLPs) and a representation of a nanobody, termed Nano-85, which binds to the VLPs and causes them to disassemble. Credit: Grant Hansman, DKFZ

Infection with highly contagious noroviruses, while not usually fatal, can lead to a slew of unpleasant symptoms such as excessive vomiting and diarrhea. Current treatment options are limited to rehydration of the patient.

“Additionally, noroviruses come in a variety of constantly evolving strains. This makes the development of an effective vaccine to protect against infection, as well as antiviral therapy to combat already-existing infections, particularly challenging”, says Dr. Grant Hansman, a virologist who leads the CHS Research Group on Noroviruses at the German Cancer Research Center (Deutsches Krebsforschungszentrum, DKFZ) and Heidelberg University.

Hansman’s research team recently discovered that a “nanobody” called Nano-85 was able to bind to intact norovirus-like particles (VLPs) in culture. Nanobodies are very similar to antibodies, which recognize and bind to antigens. “However, nanobodies are much smaller, more stable, easier to produce, and cost-effective than traditional monoclonal antibodies,” says Hansman.

Nano-85 was able to recognize the VLPs from a variety of different norovirus strains.

The researchers then tested the nanobody on stool samples from patients infected with the virus. In this context, Nano-85 was able to detect virus in one-third of the samples already known to be positive for noroviral RNA. “Because noroviruses are changing all the time, there is a need for more powerful tools to detect emerging noroviruses. We still need to optimize detection using Nano-85, but we hope that it could potentially be used as a diagnostic tool further on down the road,” explains Hansman.

In solution, Nano-85 was also able to bind to a specific portion of the VLP known as the protruding (P) domain. As with the VLPs, Nano-85 recognized the P domains from a variety of strains. Hansman describes the P domain as a structure that “essentially sticks out like a spike from the virus. Therefore, it has some degree of flexibility – like grass on a hill on a windy day. This ability to change shape likely allows the virus to evade recognition by the immune system – but could also make it more vulnerable to attack.”

Using a technique called X-ray crystallography, the researchers were able to determine the shape and molecular components of the Nano-85/P domain complex, as well as specific sites where Nano-85 and the P domain formed bonds. According to Hansman, “this is, as far as we know, the first instance in which the molecular structure of a nanobody-P domain complex has been determined for norovirus.”

Interestingly, the investigators found that the site where Nano-85 bound to the P domain was actually hidden under the viral particle’s surface. “From the virus’s point of view, this could be a strategy to keep potentially vulnerable sites protected from attack,” explains Hansman. However, when they tried to create high-magnification images of the interaction using electron microscopy, they were surprised that they could not find any intact VLPs. This led them to believe that Nano-85 itself was actually causing the VLPs to break apart.

In describing the significance of these findings, Hansman says: “If Nano-85 is indeed causing intact VLPs to disassemble, this could be a very promising lead in developing norovirus antiviral therapy. This could be especially beneficial to immunosuppressed individuals such as cancer patients. Administering a vaccine to protect against infection would overwhelm the patient’s immune system. However, if he or she has the option of receiving an antiviral to eliminate the infection, the norovirus becomes much less dangerous.” 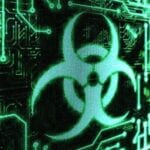 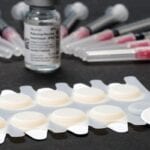