LVAP is on track to become a U.S. Department of Defense (DOD) official test and evaluation (T&E) method for VX permeation through protective CBRN equipment. A U.S. patent on the LVAP fixture and method is expected soon. 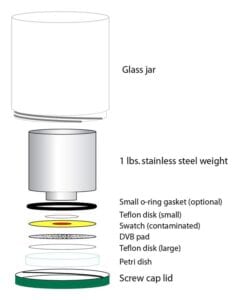 The LVAP method built upon multiple years of ECBC research, with support from the Joint Science and Technology Office (JSTO), Natick Soldier Research and Development Center (NSRDC), Deputy Under Secretary of the Army for Test and Evaluation (DUSA TE) and the Joint Project Manager for Protection.

Traditional methods of measuring permeation are dependent on collecting vapors of the permeated contaminant. This can be less accurate for low-volatility contaminants, since the vapor concentration may not represent the potential hazard that has permeated through.

LVAP has shown increased accuracy for measuring such contaminants, including VX. The method utilizes a sorbent pad to collect the total permeated mass of contaminant. A weight is applied to the fixture, ensuring that all layers are in good contact. This weight corresponds to 1 psi, which is consistent with the pressure used when grasping an object with the hand.

LVAP has recently completed an official verification and validation. As part of this testing, a physics-based model was developed to predict neat agent permeation through the test materials. This was based on a Fickian diffusion model with the diffusivity and solubility of VX in the latex material estimated by correlation with published values.

The model was successful in predicting the measured permeation for VX through latex at the 24 hour and 48 hour time points, prior to the experiments being conducted. This modeling effort was conducted in collaboration with scientists from the Decontamination Sciences Branch.

“The modeling of this method was remarkable,” said Terrence D’Onofrio, Ph.D, principal investigator for this research. “We can describe how VX interacts with different materials, and predict how much will come through over time, using these physics-based approaches.”

The modeling method can predict the levels of permeation that occur over time, guiding experiments to the enable focus on critical time points. The modeling also enables comparison with data obtained by traditional vapor-collection methods.

“This ability to predict the changes over time fills a huge gap from the previous methods,” says D’Onofrio.

LVAP has already had an impact on personal protective equipment and laboratory procedures used at ECBC. D’Onofrio and his colleagues within ECBC’s Engineering Directorate used LVAP as part of a safety initiative to test laboratory gloves against high-concentration VX solutions. Through the use of LVAP, they were able to demonstrate that the gloves offered protection for the laboratory scenario tested.

The Technical Report of this research will be used to update the lab procedures and safety training. Beyond DoD, domestic elements such as the Federal Bureau of Investigation and the Department of Homeland Security, have discussed using LVAP to test their First Responder suits. British Agencies have also expressed interest in the method.