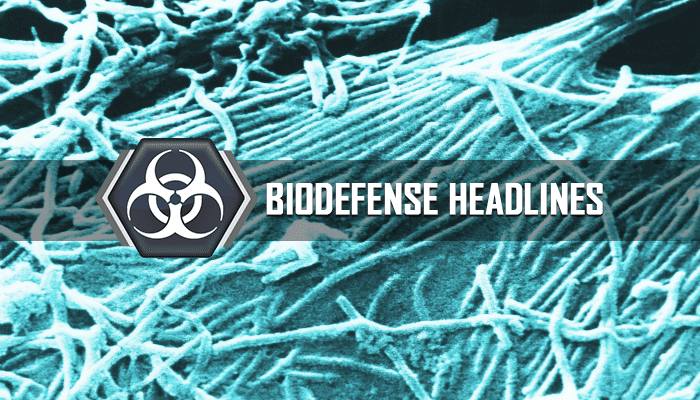 See what we’re reading this week at Global Biodefense on topics including a new DoD report analyzing synthetic biology threats, less obvious costs of pandemics to consider, and fast-tracking of a new flu therapeutic.

Imagine that within the course of six months, your county sees a measles outbreak, super bowl surveillance requirements, and Ebola surveillance. A new paper is addressing the cost of this trifecta for the largest county health department in Arizona. Pandora Report

The Biological Weapons Convention and Its Practical Application

Although the BWC lacks a large international organisation, unlike other international instruments that deal with weapons of mass destruction, it does, however, codify a very strong global norm against biological weapons. However, the norm needs to be nurtured and maintained, and attention must be paid to advances in science and technology and changes in the nature of terrorism and armed conflict. OIE Bulletin

A Structural Response to Pandemic Threats

Many estimates of the costs of pandemics fail to account for a concept known as intrinsic value, which accounts for intangible factors, such as elevated mortality. As pandemics worsen, the cost of a heightened mortality rate increases, almost eclipsing the tangible economic cost of lost income. Brink

“Flu cases jump by 256% in just five years” screams a newspaper headline from the Daily Mercury, a paywalled News Corp publication. It sure seems like scary stuff doesn’t it? But is this headline’s implication correct? Is it even accurate? Is it a good way to look at or talk about the data? Virology Down Under

Since its inception in 2008, DIYbio has grown to include over 100 community biology laboratory spaces around the globe. Over the years, the DIYbio community has dealt with inaccurate narratives communicated by the popular press. Older narratives suggest DIYbio laboratories could create doomsday pathogens, while newer narratives depict reckless individuals who self-inject their own DIY gene therapies. Pandora Report

After a rapid response by health agencies and the rollout of a new vaccine, an Ebola outbreak in the Democratic Republic of Congo has been declared “largely contained” by the WHO. More than 3,200 people were vaccinated in Congo; they included front-line health care workers, as well as family members and friends who had been in contact with known Ebola victims. NY Times

The strain of E. coli bacteria that contaminated romaine lettuce and was tied to the deaths of five people was found in a tainted irrigation canal in Arizona, federal officials said on Thursday. Samples of canal water in the Yuma area of Arizona were found to contain the same genetic strain of E. coli that caused the outbreak. NY Times

An outbreak of typhoid fever has been reported in El Salvador, with 644 suspected cases from January to the end of May. The case rate is high across the country, affecting 26 municipalities, including the capital city, San Salvador. HealthMap

Ghana has reported two outbreaks of highly pathogenic H5 bird flu on farms, the Paris-based World Organisation for Animal Health (OIE) said on Friday, citing a report from Ghana’s agriculture ministry. The outbreak in Eastern region followed the illegal movement of birds from the outbreak farm in Ashanti. Reuters

Next winter, there may be a new drug for people who contract influenza — one that appears to be able to shut down infection quickly and, unlike anything else on the market, can be taken as a single dose. STAT

Patients who are believed to be allergic to penicillin face an increased risk of methicillin-resistant Staphylococcus aureus (MRSA) and Clostridium difficile infections, possibly because the alternative broad-spectrum antibiotics they often receive promote bacterial resistance. CIDRAP

What You Might Have Missed in History Class: Black Death is Still Here

In case you haven’t been in a history class in a while, let’s set a scene for you. The year is 1347 and you are at the Messina port in Sicily. Twelve ships just arrived from the Black Sea and you excitedly go to the port to greet them. To your horror, when the ships arrive, most of the passengers were gravely ill or already deceased and were covered with black boils on the skin. The Disease Daily

Current diagnostics for biological weapons pose a problem as they only diagnose a disease after symptoms have begun or near the invasive stage. By the time that most tests pick up on a disease, like Ebola, an individual is already experiencing symptoms and thus, contagious. Summary of presentations on this topic during the Biodefense World Summit… Contagion Live

A Guide to Mosquito Repellents, From DEET to … Gin and Tonic?

People do the darnedest things in hopes of avoiding mosquito bites. They burn cow dung, coconut shells or coffee. They drink gin and tonic. They eat bananas. They spray themselves with mouthwash or slather themselves in clove/alcohol solution. None of those techniques had been tested to see if they actually keep mosquitoes away. NPR 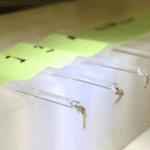 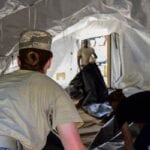