Melioidosis and the Role of Phages, UV Rays, and Fertilizer

An international research team has developed a mathematical model for monitoring and controlling the spread of melioidosis in Southeast Asia.

Melioidosis is a serious infectious disease manifesting itself as multiple abscesses of various organs due to severe sepsis. In 40 percent of the cases, the disease leads to death. Also known as Whitmore’s disease, meliodosis is caused by the bacterium Burkholderia pseudomallei, which is particularly active in soil and water.

Researchers from the University of Leicester, Lomonosov Moscow State University (MSU), and the Moscow Institute of Physics and Technology (MIPT) developed several mathematical models predicting the seasonal and daily dynamics of the size of B. pseudomallei populations. They focused on the bacterial populations on rice fields in two Thailand provinces and how the pathogen is affected by temperature-dependent phages. The variation was explored in terms of the change in temperatures and ultraviolet radiation levels.

Simulation results show that the period from March to September poses the greatest threat in this region, because that is when phages killing B. pseudomallei are at their lowest due to high levels of UV radiation. The drop in the number of phages in spring and summer means there are more bacteria unaffected by the virus. 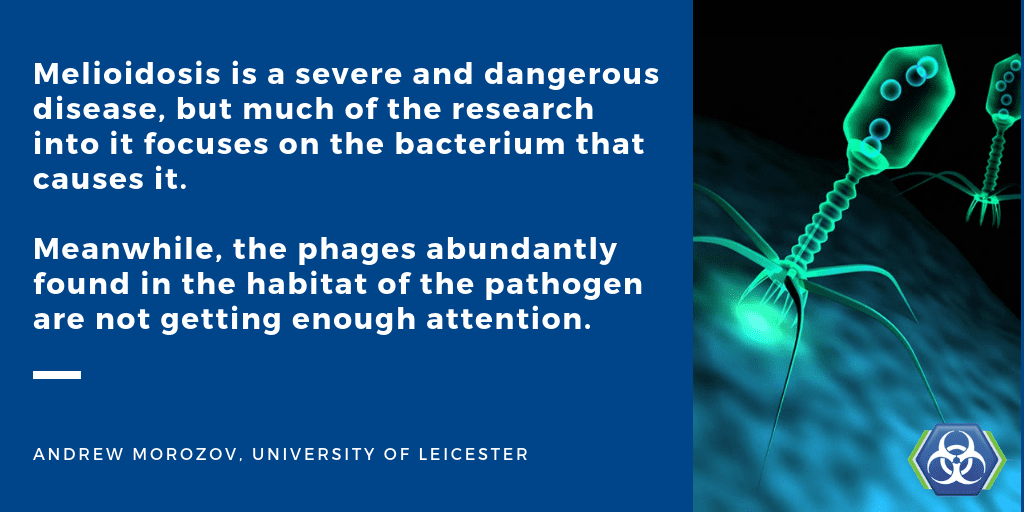 At constant UV exposure, temperature takes over as the decisive factor. Specifically, at more than 35 degrees Celsius, the phage enters the so-called lytic cycle when it destroys bacterial cells, reducing the pathogen population. The model indicates phage-free bacteria numbers are at their highest around 9 a.m. and 8 p.m.

Besides UV rays, the number of phage-free bacteria is affected by the use of fertilizers. Recent studies indicate that iron-based chemicals kill off phages, but the effects of other fertilizers are unknown. Since they result in unpredictable dynamics of B. pseudomallei populations, they might pose a risk of more frequent infections in humans.

“Melioidosis is a severe and dangerous disease, but much of the research into it focuses on the bacterium that causes. Meanwhile, the phages abundantly found in the habitat of the pathogen are not getting enough attention. We wondered whether we could predict the variation in the number of pathogenic bacteria and the impact of phages on it depending on season and environmental conditions,” explains the study co-author Dr Andrew Morozov from the University of Leicester.

The findings on B. pseudomallei-phage interactions reveal opportunities for disease control. For example, the work on rice fields can be rescheduled depending on season. Also, once the risky periods are identified, preventive measures can be introduced, such as the use of protective gear. Finally, field owners can use agrochemicals that do not harm the phages limiting the population of pathogenic bacteria.

“Mathematical modelling enables us to make predictions under various regimes. In particular, we can estimate the impact of global warming on spread of endemic zones of disease,” says Dr Morozov. “We are resuming this research: This autumn, we will run a series of experiments to study in more detail how agricultural chemicals affect the level of phages in the soil, how phages and bacteria interact in it, and which limiting factors are at play there.”