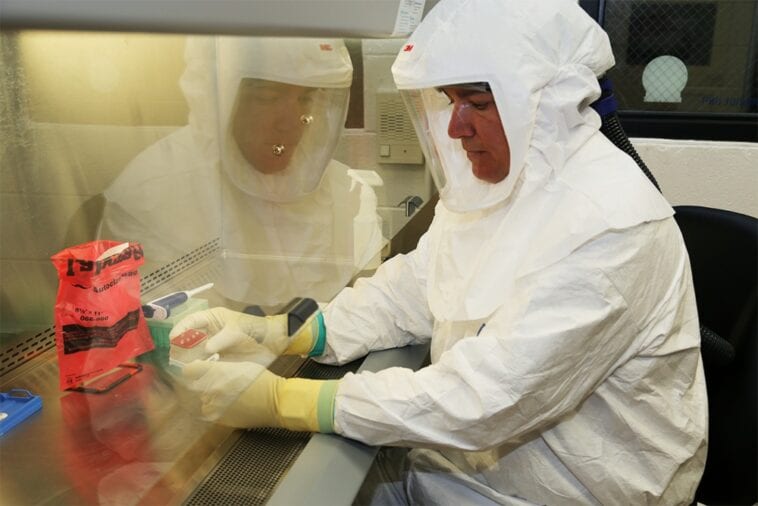 Military units conduct reconnaissance missions to obtain information – by visual observation or other detection methods – about the activities and resources of an enemy. That is exactly what a team of researchers at the U.S. Army Combat Capabilities Development Command (CCDC) Chemical Biological Center, formerly known as the U.S. Army Edgewood Chemical Biological Center (ECBC), is doing in the laboratory to better understand how a new kind of enemy, the novel coronavirus, attacks human lung cells.

“The best way to fight the virus is to understand as much as possible about how it interacts with actual lungs cells,” said Tyler Goralski, Ph.D., a Chemical Biological Center research biologist. That requires Goralski and his team of researchers to observe those interactions as directly as possible, and they have come up with a way that is much like how ants can be observed in a glass-sided ant farm. It is the transparent Alveolus Lung-Chip, a new technology developed by Emulate, Inc., a Boston company that recreates true-to-life human biology systems in microenvironments for researchers.

Emulate has been working on microphysiological systems for research for almost a decade. This effort ran in parallel with CBC efforts over the same time period. Now, with U.S. Defense Threat Reduction Agency (DTRA) funding made available to it through the FY20 Coronavirus Aid, Relief, and Economic Security (CARES) Act, the Center is taking the technical leap of using the Alveolus Lung Chip in its own research. “This project provides another expansion of capabilities at the Center, with 195more physiologically relevant human lung models,” said Kyle Glover, Ph.D., chief of the Center’s Molecular Toxicology Branch.

The result is a dynamic lung tissue microenvironment inside a clear plastic container about the size of a computer thumb drive. It has a top layer of lung tissue that recreates air moving along it, and a bottom layer that mimics blood flow delivering micronutrients inside the tissue. The cassette’s flexible plastic walls mimic the breathing process in lung cells to make the microenvironment as realistic as possible.

With the microenvironment set up, the stage was set to introduce the SARS-CoV-2 virus and watch exactly what it does to these lung tissues in real time.

“In the past, the closest researchers could get to something like this was by introducing a virus into animals and then dissect them. With this, there is no need for animals in performing toxicological research,” said Dan Angelini, Ph.D., a Center research biologist on the team. “For example, we can observe which specific lung cells engaged the virus and allowed it to cross the cell membrane. We can then track the actions of the virus inside the infected cell both recording the virus’ mechanisms of pathogenesis and the timing of the damage it causes.”

The team hopes that in this way it will be able to identify which specific proteins in lung cells act as receptors for the virus and its routes of entry. The team can also determine the exact infectious dose and time the cascade of effects inside the lung tissue when that threshold is met. That knowledge will be the first step toward creating therapeutic and protective measures that can be taken, and ultimately help in the development of preventative medications. As the team compiles this information it will share the data with the entire global medical community, which is now fighting the pandemic.

The Center is able to perform this research not only because it possesses the brain power of this particular research team, it also has state-of-the-art research facilities that can safely house an infectious virus. “We have a biosafety level 3 laboratory, or BSL3, to work with,” said Goralski. “It has engineering controls that allow us to work with microbes which can cause serious and potentially lethal disease through inhalation – which clearly includes the SARS-CoV-2 virus. So it has a negative-pressure air handling system and double sets of self-closing doors to make sure no airborne particles can escape. “Only by having it inside the BSL3 can we take our research to the next step, looking at the virus in its aerosolized state, droplets suspended in air, which is how the virus is most commonly transmitted.”

“We are fortunate to be able to bring everything together here at the Chemical Biological Center,” said Glover. “The Center has some of the best microbiologists and toxicologists in the world, willing to collaborate and find solutions to support the warfighter. In this instance, we are diving into the global battle against the COVID19 pandemic, while also significantly bolstering our capabilities to meet future chemical and biological challenges.” 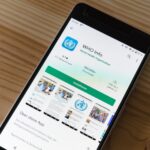 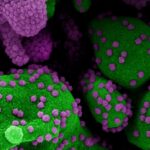