NanoViricides, Inc., a global leader in the development of highly effective antiviral therapies based on a novel nanomedicines platform, is confirming public disclosures in articles by various industry journals and other articles, that it is working on developing a treatment for the novel coronavirus 2019-nCoV, or the Wuhan coronavirus.

“We have already initiated a program for developing a treatment for the 2019-nCOV,” said Anil R. Diwan, PhD, President and Executive Chairman of the Company, adding, “Our platform technology enables possibly the most rapid pathway for new drug development against viral diseases. Of course, we will need support from governmental and international agencies such as the US CDC, WHO, and Chinese CDC to successfully develop these treatments, and, if developed, to get them to the patients in the fastest possible time. At this time, the Company does not have a collaboration with any of these agencies, and we have not been contacted by any of these entities or asked to develop a treatment for this virus. We had collaborations with the CDC and USAMRIID in the past. The Company intends to pursue a relevant collaboration for testing of our drug candidates soon.”

The new 2019-nCoV is known to be closely related to the SARS-CoV of 2002-2003 epidemic. In fact it has been shown to use the same cell surface receptor as SARS-CoV, namely ACE2.

“We have already found some lead candidate ligands in our chemical library that can bind to the SARS-CoV spike protein in the same fashion as it binds to the cognate receptor, ACE2, using molecular modeling tools,” explained Dr. Diwan, adding, “We believe this means we may already be significantly ahead in developing a potential treatment for the new Wuhan virus.”

While the Company commissions synthesis of the anti-nCoV nanoviricide drug candidates for testing, some of which are already in our hands, in parallel, the Company has also started preparing for testing of the candidates in cell cultures against certain known BSL2 coronaviruses, including ones that use the ACE2 receptor. Less threatful viruses in the same family that use the same receptor can serve as valid test viruses for screening our broad-spectrum antiviral drug candidates. The Company has its own BSL2-certified virology laboratory at its Shelton campus where it intends to perform this testing.

The Company has its own cGMP-capable drug manufacturing facility. This highly customizable facility can be employed to produce several thousand doses of drugs per batch for treating coronavirus patients, if the Company’s drug successfully transitions to obtaining an exploratory treatment approval for use in patients.

The Company’s platform technology has already proven that it can result in safe drugs. The Company’s first IND-ready clinical drug candidate, namely NV-HHV-101, has successfully undergone a standard battery of Safety and Toxicological testing, as previously disclosed by the Company in press releases and SEC filings.

The Company is building on its previous work against coronaviruses. The Company’s technology relies on copying the human cell-surface receptor to which the virus binds, and making small chemicals that are called “ligands” that will bind to the virus in the same fashion as the cognate receptor. These ligands are chemically attached to a nanomicelle, to create a nanoviricide®. It is anticipated that when a virus comes in contact with the nanoviricide, not only would it land on the nanoviricide surface, binding to the copious number of ligands presented there, but it would also get entrapped because the nanomicelle polymer would turn around and fuse with the virus lipid envelop, harnessing a well known biophysical phenomenon.

“It is like a ‘Venus-Fly-Trap’ for the virus,” explained Dr. Diwan.

The Company focuses on developing broad-spectrum ligands and, thereby, broad-spectrum nanoviricides, copying the specific human cellular receptor. No matter how much a virus mutates, it lands on the same cell surface receptor, and binds in the same fashion. Thus, it is highly unlikely that a virus might escape a nanoviricide against it, in spite of mutations.

In 2014, the Company had worked on developing antiviral treatments against MERS-CoV, and coronaviruses in general. It had developed potential candidates for testing in animal models. The MERS-CoV threat was eclipsed by the Ebola epidemic of 2015. The Company developed viable drug candidates against Ebola in a rapid response time of a few weeks and sent them for testing to USAMRIID. These initial candidates showed significant activity. The Company believes that another cycle of optimization would have resulted in a candidate ready for animal testing under the criteria established by USAMRIID then.

During these previous crises, the Company did not have the modern labs, the cGMP drug manufacturing facility or the BSL2 virology testing facility, all of which were commissioned after 2015 at its modern campus in Shelton, CT.

The Company is preparing an IND application for its first clinical drug candidate to go into human clinical trials. This drug candidate, NV-HHV-101, is a skin cream with the treatment of shingles rash as its first indication. It has shown broad-spectrum activity against HSV-1 (cause of “cold sores”), HSV-2 (cause of “genital ulcers”), and VZV (the varicella-zoster virus, that causes chickenpox in children and immune-compromised humans, and shingles in adults).

NV-HHV-101 has already gone through standard battery of safety-toxicological testing, which provides confidence that our platform is capable of creating safe drugs.

The Company has its own cGMP-capable drug manufacturing facility where it intends to produce the drugs for clinical supply.

The Company’s top priority remains working on its first IND application for NV-HHV-101. The Company intends to solicit interest and financing from government agencies in order to accelerate its work on the coronaviruses.

The market size for the treatment of shingles is estimated at approximately one billion dollars by various estimates. These estimates take into account the Shingrix® vaccine as well as existing vaccines. About 500,000 to 1million cases of shingles occur in the USA alone every year.

The market size for our immediate target drugs in the HerpeCide™ program is variously estimated at billions to tens of billions of dollars. The Company believes that its dermal topical cream for the treatment of shingles rash will be its first drug heading into clinical trials. The Company believes that additional topical treatment candidates in the HerpeCide™ program, namely, HSV-1 “cold sores” treatment, and HSV-2 “genital ulcers” treatment are expected to follow the shingles candidate into IND-enabling development and then into human clinical trials. These additional candidates are based on NV-HHV-101, thereby maximizing return on investments and shareholder value.

The Company develops its class of drugs, that we call nanoviricides®, using a platform technology. This approach enables rapid development of new drugs against a number of different viruses. A nanoviricide is a “biomimetic” – it is designed to “look like” the cell surface to the virus. The nanoviricide® technology enables direct attacks at multiple points on a virus particle. It is believed that such attacks would lead to the virus particle becoming ineffective at infecting cells. Antibodies in contrast attack a virus particle at only a maximum of two attachment points per antibody. In addition, the nanoviricide technology also simultaneously enables attacking the rapid intracellular reproduction of the virus by incorporating one or more active pharmaceutical ingredients (APIs) within the core of the nanoviricide. The nanoviricide technology is the only technology in the world, to the best of our knowledge, that is capable of both (a) attacking extracellular virus, thereby breaking the reinfection cycle, and simultaneously (b) disrupting intracellular production of the virus, thereby enabling complete control of a virus infection.

NanoViricides, Inc. is a development stage company that is creating special purpose nanomaterials for antiviral therapy. The Company’s novel nanoviricide® class of drug candidates are designed to specifically attack enveloped virus particles and to dismantle them. Our lead drug candidate is NV-HHV-101 with its first indication as dermal topical cream for the treatment of shingles rash. The Company is also developing drugs against a number of viral diseases including oral and genital Herpes, viral diseases of the eye including EKC and herpes keratitis, H1N1 swine flu, H5N1 bird flu, seasonal Influenza, HIV, Hepatitis C, Rabies, Dengue fever, and Ebola virus, among others. The Company’s technology is based on broad, exclusive, sub-licensable, field licenses to drugs developed in these areas from TheraCour Pharma, Inc. 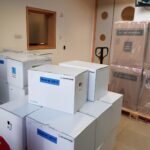