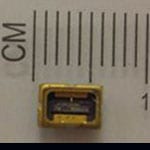 Professors Jayne Wu and Shigetoshi Eda of the University of Tennessee (UT) have developed a small, portable immunoassay system for onsite rapid detection of pathological and physiological conditions in humans and animals.

The device takes less than five minutes to distinguish positive disease samples from negative samples and does not require labeling of the analyte. A microchip for the device is pre-treated with disease-specific antigens. When the sample is added to the microchip, the result is considered positive if the antigens and antibodies match up.

The device has been successfully used to detect tuberculosis in humans and wild animals, as well as Johne’s Disease in cattle. “Johne’s Disease is highly prevalent in this country and is causing more than $200 million of annual losses to the US dairy industry,” said Eda. “Since there is no practical treatment for the disease, early diagnosis is critically important for disease control in dairy farms. This, in turn, helps farmers’ business and the milk supply.”

The scientists say they expect the device to be expanded to detect various diseases and physiological conditions.  Diagnosing Alzheimer’s and cancer, detection of pathogens in food, and valuable applications in disaster relief, biodefense or disease outbreaks are envisioned.

“Time is of the essence in treating infectious diseases,” said Wu. “This device has the potential to save a lot of lives by saving time in detection. It also saves a lot of money as it is cheaper to detect diseases than the system that is currently being used since we do not have to send them to a lab and have the sample be scrutinized by technicians.”

The Professors Wu and Eda invention received $15,000 from the UT Research Foundation to further development of their technology to advance its positioning for licensing and commercialization.

Image courtesy of the University of Tennessee, Knoxville.