Biosurveillance: Most Likely Airports to Spread a Pandemic 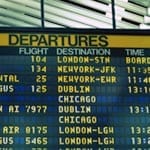 Researchers at the Massachusetts Institute of Technology (MIT) Department of Civil and Environmental Engineering (CEE) have developed a new tool to better understand the impact of airport travel on the early stages of a pandemic outbreak.

The new MIT modeling method determines how likely 40 of the largest U.S. airports are to influence the spread of a contagious disease originating in their home cities.

According to MIT News, this new approach could help develop better preparedness measures for containing infection in specific geographic areas and aid public health officials in making decisions about the distribution of vaccinations or treatments in the earliest days of contagion.

Existing models typically assume a random diffusion of travelers from one airport to the next. The new MIT model “incorporates more realistic variations in travel patterns among individuals, the geographic locations of airports, the disparity in interactions among airports, and waiting times at individual airports” (MIT News) to create a more informed tool to predict spread of the pandemic via airports.

“The findings could form the basis for an initial evaluation of vaccine allocation strategies in the event of an outbreak,” says Ruben Juanes, the ARCO Associate Professor in Energy Studies in CEE.  The research could also better inform defense and public health agencies of the most vulnerable pathways for biological attacks in such a densely connected world.

Applying research on human mobility patterns, trace contagion processes in social networks, and the flow of fluids through fracture networks in subsurface rocks, the team was able to create a model that better replicates the patterns of individual travelers. Conventional models would generally conclude airports with the largest amount of traffic would be the most influential spreaders of disease. But the new model shows this to be inaccurate.

For example, older models using random diffusion might assume that half the travelers at the Honolulu airport will go to San Francisco and half to Alaska, spreading the contagion to travelers at those airports, who would randomly travel and continue to spread the disease.

“In fact, while the Honolulu airport gets only 30 percent as much air traffic as New York’s Kennedy International Airport, the new model predicts that it is nearly as influential in terms of contagion, because of where it fits in the air transportation network: Its location in the Pacific Ocean and its many connections to distant, large and well-connected hubs gives it a ranking of third in terms of contagion-spreading influence.” (MIT News)

Read more about the project at MIT News: New model of disease contagion ranks U.S. airports in terms of their spreading influence

Will the BA.2 Subvariant Cause Another Wave of Infections in the US?