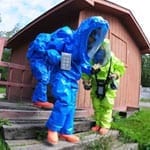 The training will take place September 20-28, 2012 in coordination with U.S. Army North (ARNORTH), Joint Task Force Civil-Support, which will be conducting the evaluation for the training events on-site.

The intent to sole source was announced under Solicitation Number: W901UZ12P0085.