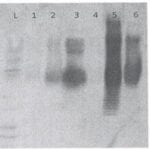 Apichai Tuanyok dedicated several years to working on a bacterial pathogen in Canada, but his breakthrough occurred in Flagstaff with an unexpected finding on a routine lab report.

Although the bacterial strain Tuanyok is investigating at Northern Arizona University is closely related to, but not the same, as the one he had researched in Canada, the results felt like a payoff for all the effort.

“I emailed many people that day,” Tuanyok said, recalling his excitement at the lab report filed by his graduate student. What Tuanyok wrote in the email was that he possibly had found a vaccine target for glanders, a severe infectious disease that is usually limited to horses and donkeys but has potential as a biowarfare agent.

Follow-up tests at NAU’s Center for Microbial Genetics and Genomics (MGGen), where Tuanyok is an assistant research professor of biological sciences, have convinced Tuanyok that “we have the right target, but we have to identify further what bacterial species would be a good candidate” for an effective vaccine.

What Tuanyok found was that a common soil bacterium known as ATPK 1 plays a role in generating protective immunity against glanders infection, with a 70 percent survival rate among infected laboratory mice.

Glanders, caused by the bacterium Burkholderia mallei, occurs in several countries in the Middle East, Mediterranean and South America. Human infection is uncommon but when it occurs, the bacterium is highly antibiotic resistant. No vaccine currently exists.

The Department of Defense has taken an interest because the bacterium, in aerosolized form, could be used as a bioweapon. During the First World War, it is believed that Germany used methods to spread glanders intentionally, infecting Russian horses and mules used by the military. It was also used by the Japanese in World War II.

Tuanyok is working on a manuscript with Paul Keim, NAU Regents’ professor and director of MGGen, to describe the research and hopefully generate more funding.

It was Keim, in fact, who brought Tuanyok to the MGGen lab based on his work with melioidosis, a tropical disease that claims thousands of lives each year in Tuanyok’s native Thailand. The bacterium behind that disease, Burkholderia pseudomallei, was still Tuanyok’s focus when he first arrived at NAU in 2006. He may yet return to it.

“The vaccine we’re working on may not be used for another disease,” Tuanyok said, “but I have another idea for melioidosis and I may be able to do some work in parallel.”