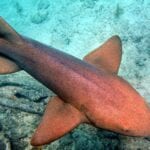 The overall goal of the research is to create more rugged immunodiagnostic assays using single domain antibodies (sdAbs). While traditional antibody-based tests use canonical antibodies (cAbs), whose relative fragility requires a cold chain for storage and transportation, sdAbs have a much higher thermostability while maintaining comparable affinities and immunogenicity.

Sharks, llamas and other camelids are the only known species to produce such sdAbs.  Under the research award, sharks will be inoculated with recombinant vaccinia virus protein L1 to stimulate sdAb production against L1.

The contract includes a one-year base period with four twelve-month option periods.

Related Resource: Design and testing of a thermostable platform for multimerization of single-domain antibodies (US Army RDECOM, August 2012 .pdf)