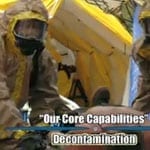 JTF-CS is the nations’ only standing CBRN joint task force. It is comprised of active, reserve and National Guard members from the Army, Navy, Air Force and Marines as well as civilian and contract personnel. Established in October 1999, JTF-CS is assigned to U.S. Northern Command (USNORTHCOM) and is focused on CBRN consequence management planning, preparedness and command and control of Department of Defense forces during CBRN incidents.