Pandemic Lessons from the Koala Retrovirus 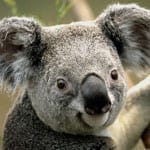 The pervasive Koala retrovirus (KoRV) has been implicated as the agent of Koala Immune Deficiency Syndrome (KIDS), an AIDS-like immunodeficiency that leaves infected koalas more susceptible to deadly disease such as lymphoma, leukaemia, and malignant tumors. In fact, approximately 80 percent of deaths in captive koalas are attributed to the retrovirus.

Retroviruses in the genomes of our ancestors show how past invasions similar to what the koalas are experiencing gave rise to chunks of viral DNA that now compose around 8 percent of the human genome.

“When scientists look at the genomes of humans and other animals, they see stretches of DNA that bear indisputable hallmarks of viruses,” says Zimmer. “In many cases, two closely related species will share the same viral DNA at the same spot in their genomes. That shared remnant of an ancient parasite tells scientists that the virus infected the common ancestor of both species.”

Read the rest of the story at Slate: Past Pandemics Are in Our Genes