Swine Flu Spreads Through the Balkans 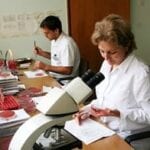 Epidemiologists in Southeast Europe are warning that regional countries are facing a new wave of influenza, and many are already infected with H1N1, commonly known as swine flu.

Doctors are warning that patient numbers will grow in the coming weeks, and the H1N1 infection will become widespread.

“Influenza infection was confirmed in five patients early this year. The swine flu is confirmed in the three of five registered cases; the two other cases it’s the infection of influenza A (H3N2),” said Marija Zeljko, epidemiologist at the Institute for Public Health in Sarajevo.

Doctors, however, are assuming there are far more people infected with swine flu in Bosnia and Herzegovina (BiH) than are reported, since only the patients who are suspected to have the virus are laboratory tested. The tests are done in Sarajevo at the H1N1 referral lab.

In Kosovo, a 37-year-old woman died from complications caused by the swine flu, but doctors said that new cases of seriously ill citizens have not been detected.

According to Milan Jovanovic, who works at the Batut Institute for Public Health in Belgrade, Serbia registered 13 patients with swine flu.

According to the Institute, the number of people infected in the region is increasing.

“The number of infected will grow when schools and colleges start the new semester. There is a low percentage [that were] vaccinated against seasonal flu,” Jelena Ravlija, head of the epidemiology at the Federal Bureau of Public Health in Sarajevo, told SETimes.

Experts are advising the public to be on the alert, but they stressed that every person who is infected with the flu is not necessarily stricken with the H1N1 virus.

“The virus that caused the pandemic in 2009 and 2010 now has all the characteristics of the ordinary seasonal flu. This is no longer the same virus … it’s no longer necessarily fatal; the consequences and treatments are common as with a seasonal flu,” Branislav Tiodorovic, an epidemiologist at the faculty of medicine in Nis, Serbia, and a working group member on the pandemic, told SETimes.

In Montenegro, the institute for public health said that 150 cases have been registered so far. The greatest number of patients is between 25 and 64 years of age.

In Macedonia, 300 patients were registered as having the H1N1 virus. The country’s ministry of health said 30,000 people were vaccinated against the flu in the country.

However, regional interest in receiving the vaccine is not high.

“[BiH] cantons were given 10,000 doses of vaccine, but all are not used,” said Blasko Topalovic, head of the epidemiology at the institute of public health in Tuzla.

Although the vaccination does not provide 100 percent protection, officials said it significantly reduces complications when infection occurs. Physicians advise that those older than 65 be vaccinated.

Image: Tests for swine flu in BiH are done in Sarajevo at the H1N1 referral lab.