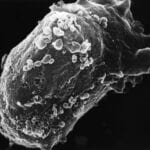 Engineers and physical scientists at the Ragon Institute are joining immunologists and physicians in the battle against infectious disease by contributing new approaches to medical countermeasures technology, materials and computational studies.

The primary mission of the Ragon Institute — launched jointly in 2009 by Massachusetts General Hospital (MGH), MIT and Harvard University — is to develop new HIV vaccines through better understanding of how the immune system responds to infection. Bruce Walker, the MGH physician who directs the institute, says it was important to enlist engineers and physical scientists, who have usually been excluded from traditional HIV research, to contribute different tools and approaches to the problem.

The organization encourages its researchers to develop new technology and pursue ideas that might not be funded through traditional channels. These include new materials for vaccine delivery and new technology for studying the virus’s interactions with the immune system.

For example, Darrell Irvine, an MIT professor of materials science and engineering and member of the Koch Institute, is working on a new polymer film that can deliver DNA vaccines under the skin. DNA vaccines were first tested about 20 years ago and found to elicit strong immune responses in rodents but have thus far failed to provoke any protective immunity in human clinical trials.

With the new polymer film developed by Irvine and his colleagues, DNA vaccines are embedded in layers of polymer films that gradually degrade, releasing the vaccine over days or weeks. The film also includes an adjuvant consisting of a strand of RNA similar to viral RNA. This molecule provokes inflammation in the target tissue, which helps to recruit immune cells to the area, so they can encounter the antigen encoded by the DNA.

The vaccine-delivering film showed success in tests of mice, and the researchers now hope to test it in nonhuman primates. Much of this work would likely not have happened without both funding from the Ragon Institute and the interdisciplinary collaborations that have arisen because of the institute.

“It’s been absolutely fantastic for me and many of the MIT faculty that have been involved,” Irvine says. “There are really two paths being followed at all times: a very focused mission to try and get an HIV vaccine developed, but also an interest in making sure that we don’t miss new opportunities in the basic science that might bring totally new vaccine concepts forward.”

Read the rest of the story by Anne Trafton at MIT News.