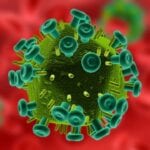 A two-year-old child born with HIV infection and treated with antiretroviral drugs beginning in the first days of life no longer has detectable levels of virus using conventional testing -despite not taking HIV medication for 10 months – according to findings presented today at the Conference on Retroviruses and Opportunistic Infections (CROI) in Atlanta.

This is the first well-documented case of an HIV-infected child who appears to have been functionally cured of HIV infection — that is, without detectable levels of virus and no signs of disease in the absence of antiretroviral therapy. The discovery provides clues for potentially eliminating HIV infection in other children

Further research is needed to understand whether the experience of the child can be replicated in clinical trials involving other HIV-exposed children, according to the investigators.

The case study was presented at the CROI meeting by two pediatric HIV experts that led the analysis of the case: Deborah Persaud, M.D., Associate Professor of Infectious Diseases at the Johns Hopkins Children’s Center in Baltimore; and Katherine Luzuriaga, M.D., Professor of Pediatrics and Molecular Medicine at the University of Massachusetts Medical School in Worcester.

In July 2010, the child was born prematurely in Mississippi at 35 weeks, to an HIV-infected mother who had received neither antiretroviral medication nor prenatal care. Because of the high risk of exposure to HIV, the infant was started on liquid antiretroviral treatment. The newborn’s HIV infection was confirmed through two blood samples obtained on the second day of life. The baby was discharged from the hospital at 1 week of age and placed on liquid antiretroviral therapy.

Additional plasma viral load tests performed on blood from the baby over the first three weeks of life again indicated HIV infection. However, by Day 29, the infant’s viral load had fallen to less than 50 copies of HIV per milliliter of blood (copies/mL). The baby remained on the prescribed antiretroviral treatment regimen until 18 months of age (January 2012), when treatment was discontinued for reasons that are unclear.

Today, the child continues to thrive without antiretroviral therapy and has no identifiable levels of HIV in the body using standard assays.  “This case suggests that providing antiretroviral therapy within the very first few days of life to infants infected with HIV through their mothers via pregnancy or delivery may prevent HIV from establishing a reservoir, or hiding place, in their bodies and, therefore, achieve a cure for those children,” said Dr. Persaud.