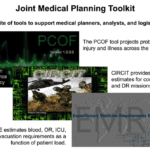 The Naval Health Research Center (NHRC) developed a suite of medical planning models that are providing the joint medical planning community with a robust capability to conduct end-to-end modeling of the expeditionary medicine mission.

Estimating the medical requirements for treating illnesses and injuries incurred during military operations is a critical component of the expeditionary medical resource planning process.

NHRC began development of the Joint Medical Planning Tool (JMPT) in the early 1990s under an initial grant from the Naval Bureau of Medicine and Surgery (BUMED). This effort was designed to fill a gap in the ability to conduct analysis of far-forward medical treatment using modeling and simulation.

Further development enabled JMPT to include theater hospitalization and expanded the representation of medical treatment facilities and transportation assets to include all the services. Over the years, JMPT was used to support over 22 studies and analyses for 16 customers DoD- wide.

Formal verification and validation testing commenced in the summer of 2012, and JMPT was accredited by the Force Health Protection Integrating Council (FHPIC) as a DoD medical planning and programming tool authorized for use in medical systems analysis, logistical analysis, operational risk assessments, and theater medical course of action assessments.  JMPT became the joint standard for medical modeling and simulation.

In January 2013, JMPT was granted an Authorization to Operate (ATO) by U.S. Fleet Cyber Command and was granted a type of accreditation that permits use on Navy networks. ATOs for the other service networks are in process.

PCOF tables provide the probabilities of specific disease and injury types sustained during a contingency response. The medical planning community lacked a functional and accurate means of estimating PCOFs for different operational scenarios. This tool provides the capability to access evidence-based baselines and generate user-defined estimates tailored to a specific operation. The tool provides the capability to generate PCOF distributions for humanitarian assistance (HA) and disaster relief (DR) missions as well as various combat operations. The PCOF tool was accredited by the FHPIC for DoD-wide use.

Hospitals Resilience to Extreme Events: One-Third of Staff May Be Lost During a Disaster