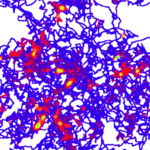 A new study by researchers at UCLA, Northwestern University and the University of Washington is the first to identify the strategy by which bacteria form the micro-colonies that become biofilms.  The research may have significant implications for battling difficult bacterial infections that do not respond to antibiotics.

Bacteria on a surface wander around and often organize into highly resilient communities known as biofilms. It turns out that they organize in a rich-get-richer pattern similar to many economies, according to scientists.

Bacteria in biofilms behave very differently from free-swimming bacteria. Within biofilms, bacteria change their gene expression patterns and are far more resistant to antibiotics and the body’s immune defenses than individual, free-swimming bacteria, because they mass together and are protected by a matrix of proteins, DNA and long, chain-like sugar molecules called polysaccharides. This makes seemingly routine infections potentially deadly.

The researchers developed algorithms that describe the movements of the different strains of the bacterium Pseudomonas aeruginosa —which causes difficult-to-treat and sometimes lethal infections– and conducted computer simulations to map the bacteria’s movements.

Surprisingly, the researchers found that the individual bacteria that start the formation of micro-colonies have no special, inherent qualities. As bacteria move across a surface, they leave trails composed of a specific type of polysaccharide called Psl. “Some of the bacteria remained fixed in position,” Parsek said. “But some moved around on the surface, apparently randomly, but leaving a trail that influenced the surface behavior of other bacteria that encountered it.”

Bacteria arriving later also lay trails, but their movements tend to be guided by the trails from the pioneers. This network of trails creates a process of positive feedback and enables bacteria to organize into micro-colonies that mature into biofilms. By being at the right place at the right time, and by using communally produced polysaccharides, a small number of lucky cells — often ones that come later — become the first to form micro-colonies. Cells in micro-colonies have many survival advantages over other bacteria.

Interestingly, these biofilms develop in accordance with Zipf’s Law, which has been used to describe the phenomenon of a small portion of a population controlling the majority of that population’s wealth. “It turns out bacteria do something similar,” Wong said. “A small number of bacteria have the best access to the lion’s share of communally produced polysaccharides.”

Wong said the research may provide insight into how to fight antibiotic-resistant bacteria. “Typically, when we want to get rid of bacteria, we just kill them with antibiotics,” he said. “As a result, they develop defense mechanisms and grow stronger. Maybe that’s not always the best way to treat biofilms. Perhaps we can regulate bacterial communities the way we regulate economies. Our work suggests that new treatment options may use incentives and communications, as well as punishment, to control bacterial communities.