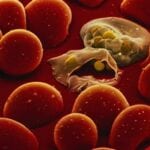 Mosquitoes are deadly efficient disease transmitters. Research conducted at Michigan State University, however, demonstrates that they also can be equally adept in curing diseases such as malaria.

A study in the current issue of Science shows the transmission of malaria via mosquitoes to humans can be interrupted by using a strain of the bacteria Wolbachia in the insects. In a sense, Wolbachia would act as a vaccine of sorts for mosquitoes that would protect them from malaria parasites. Treating mosquitoes would prevent them from transmitting malaria to humans, a disease that in 2010 affected 219 million people and caused an estimated 660,000 deaths.

“Wolbachia-based malaria control strategy has been discussed for the last two decades,” said Zhiyong Xi, MSU assistant professor of microbiology and molecular genetics. “Our work is the first to demonstrate Wolbachia can be stably established in a key malaria vector, the mosquito species Anopheles stephensi, which opens the door to use Wolbachia for malaria control.”

First, Xi’s team successfully demonstrated how Wolbachia can be carried by this malaria mosquito vector and how the insects can spread the bacteria throughout the entire mosquito population. Secondly, researchers showed that the bacteria can prevent those mosquitoes from transmitting malaria parasites to humans.

The basis for Xi’s latest findings is connected to the success of his work using Wolbachia to halt Dengue fever. For this research, Xi focused on the mosquito species Aedes albopictus and Aedes aegypti. This work helped launch a global effort to develop Wolbachia-based strategies to eliminate dengue and other diseases.

The key to the malaria research was identifying the correct species of Wolbachia – wAlbB – and then injecting it into mosquito embryos. Out of the thousands of embryos injected by research associate Guowu Bian, one developed into a female that carried Wolbachia. The mosquito line derived from this female has maintained Wolbachia wAlbB infection with a 100 percent infection frequency through 34 generations. The number could grow higher as this is simply the last generation the researchers have bred thus far, Xi said.

The team then introduced various ratios of Wolbachia-infected females into a noninfected mosquito population. In each case, the entire population carried the bacteria in eight generations or less.

Once Wolbachia has been released into a mosquito population, it is quite possible that it won’t need to be reapplied, making it more economical than other methods like pesticide or human vaccine. This adds special value to the feasibility of this control strategy, considering most of the malaria endemic areas are suffering from poverty, Xi said.