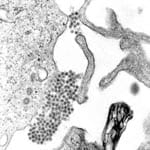 Researchers have identified the dose of dengue virus in human blood that is required to infect mosquitoes when they bite. Mosquitoes are essential for transmitting the virus between people so the findings have important implications for understanding how to slow the spread of the disease.

By defining the threshold of the amount of virus needed for transmission, the research also provides a target that experimental dengue vaccines and drugs must prevent the virus from reaching in order to be successful at preventing the spread of disease during natural infection.

Dengue is a viral infection that is transmitted between humans by mosquitoes. In most people it causes flu-like symptoms but in a small proportion of cases the disease can become life-threatening. Recent estimates indicate that there are 390 million infections of dengue across the globe each year and with no vaccine or specific treatment available, current measures to prevent the spread of disease are focused on controlling the mosquito vector.

In research funded by the Wellcome Trust, scientists and doctors at the Oxford University Clinical Research Unit at the Hospital for Tropical Diseases in Vietnam studied the factors that influence the transmission of dengue viruses from dengue patients to the mosquitoes that feed on them. Their findings reveal that mosquitoes that feed on dengue patients with very high levels of virus in their blood are more likely to be infectious to other humans two weeks later.

“Our findings suggest that focused public health intervention strategies to prevent transmission from these ‘high risk’ spreaders of the virus could have a major impact in slowing the spread of disease,” explains Professor Cameron Simmons, a Wellcome Trust Senior Fellow at the Oxford University Clinical Research Unit in Vietnam.

Although the levels of virus in patients who had been hospitalized by the disease were much higher, the majority of patients with mild symptoms who were treated at outpatient centers also had enough virus in their blood to support transmission.

“At the moment, dengue surveillance systems typically only count hospitalized patients but our findings confirm that less serious cases represent an equally important source of virus infection. Since these cases often remain in the community for the duration of their illness, it’s important that we explore ways to prevent such patients from providing a source of further virus transmission,” added Professor Simmons.

The researchers hope that understanding the level of virus needed for transmission of infection will provide a useful reference point for the development of experimental drugs and vaccines and could be used to inform the endpoints for clinical trials evaluating such interventions.