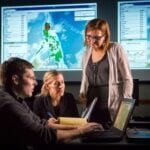 A team of scientists from The Johns Hopkins University Applied Physics Laboratory (APL) has developed a novel method to accurately predict dengue fever outbreaks several weeks before they occur.

The new method, known as PRISM — PRedicting Infectious Disease Scalable Model — extracts relationships between clinical, meteorological, climatic and socio-political data. The system has been successfully pilot tested for dengue prediction in Peru and the Philippines; and the system can be adapted to other geographical region and extended to other environmentally influenced infections affecting public health and military forces.

PRISM is aimed at helping decision-makers and planners assess the future risk of a disease occurring in a specific geographic area at a specific time. Developed by APL’s Anna Buczak and a team of researchers for the Department of Defense (DoD), PRISM predicts the severity of a given disease at a specific time and place with quantifiable accuracy, using original analytical and statistical methods.

“By predicting disease outbreaks when no disease is present, PRISM has the potential to save lives by allowing early public health intervention and decreasing the impact of an outbreak,” says Sheri Lewis, APL’s Global Disease Surveillance Program Manager. The DoD is currently evaluating PRISM for use in mitigating the effects of infectious disease in various operational settings.

PRISM’s distinctive prediction method utilizes Fuzzy Association Rule Mining (FARM) to extract relationships between multiple variables in a data set. These relationships form rules, and when the best set of rules is automatically chosen, a classifier is formed. The classifier is then used to predict future incidence of the disease – in this case dengue fever, the second most common mosquito-borne disease, which puts more than one-third of the world’s population at risk.

While PRISM’s pilot predictive analysis was the study of dengue fever in Peru, APL scientists have extended the method to predicting dengue in the Philippines and are working to fine-tune the model and expand its capabilities to include other infectious diseases. “Dengue was the starting point for our work because the data were readily available, but eventually we want to apply the methodology to other diseases, such as malaria and influenza,” says Lewis.

Once fully operational, PRISM will aid in the earliest possible detection of illness within a community by complementing electronic disease surveillance systems such as the APL-developed Electronic Surveillance System for the Early Notification of Community-based Epidemics (ESSENCE) and the Suite of Automated Global Electronic bioSurveillance (SAGES).

ESSENCE collects, processes and analyzes non-traditional data sources to identify disease activity in a community, allowing data to be queried, analyzed and visualized by the end user. SAGES is a collection of freely available software, including open source versions of ESSENCE, for electronic surveillance in countries with little funding for public health initiatives. SAGES can be used alone or with existing surveillance applications providing governments with the flexibility to develop inexpensive and customized systems to collect and track information about the spread of diseases.

Image: The PRISM team has used a data modeling method to successfully predict dengue fever in pilot tests in Peru and the Philippines. Credit: JHU APL