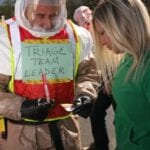 Public health personnel, first responders and emergency operations staff from counties in southern Washington state are hosting a three-day exercise this week to test their response to a simulated bioterrorism attack.

The exercise is part of the Washington State Annual Bioterrorism Exercise taking place May 21-23 to test readiness among public agencies and community organizations should terrorists unleash a biological agent, such as anthrax, in Southwest Washington.

The first day of the exercise, May 21, will test public health’s ability to identify the agent and the source of exposure. On day two, an incident management team will handle the continuing investigation and plan for a medical response. On the third day, public health will set up a medication center at Clark College and distribute imitation antibiotics.

During the same timeframe, officials in Portland metropolitan area will simulate a terrorist attack involving a biological weapon, with participation involving personnel from 65 jurisdictions in the area.

The purpose of the exercise is to test the region’s ability to respond to a complex public health incident affecting multiple agencies across several political boundaries. The exercise will address policy, plans, and operations related to bioterrorism incident mobilization and response.

During one phase of the drill, more than 100 students from area high schools will go through medical triage with various imaginary symptoms and 30 of them will be taken to a nearby hospital for decontamination. (Source: KGW News Portland)

The event will be the largest emergency response drill in the Portland area since the TOPOFF4 drill in 2007 that simulated an attack from a small radiological bomb.