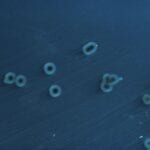 Scientists from the Pacific Northwest National Laboratory (PNNL) have found a particular kind of molecular switch in the food poisoning bacteria Salmonella typhimurium under infection-like conditions.

The newly discovered switch might regulate when or how proteins work while offering protection, providing researchers insight into Salmonella infection.

Using a process called S-thiolation, the switch appears to be used by the bacteria to respond to changes in the environment during infection and protects proteins from irreversible chemical changes when a cell is stressed.

“We continue to recognize just how clever this bug is in adapting to its environment,” said systems biologist Josh Adkins of the Department of Energy’s Pacific Northwest National Laboratory. “During infection it lives in hostile environments, and so it can use multiple approaches to adjust its functions.”

Most technologies that examine a cell’s ensemble of proteins do so by chopping the proteins up. This method allows a researcher to determine that a particular protein was present, but not if it was actually functioning. The PNNL researchers wanted to look at whole proteins to gain more information on how they are regulated.

Using a method called top-down proteomics, the team identified 563 unique proteins. This number is comparable to fungus and human studies but almost three times as many as in other bacterial studies using top-down proteomics. They also determined if the proteins had molecular modifications on them. These can cap an end of a protein or dot the protein’s length. Because different modifications can be mixed and matched on one protein, they ended up with a total of 1,665 different forms of the 563 unique proteins.

“This study shows how well top-down proteomics works, especially to get at regulatory information,” said co-author Liljana Pasa-Tolic, who led top-down proteomics development with mass spectroscopy research by Si Wu at the Environmental Molecular Sciences Laboratory on the PNNL campus.

In addition, switching S-thiolation modifications appeared to be a talent unique to Salmonella. The team checked other bacteria such as Escherichia coli, a common gut bacteria, and Yersinia pestis, which causes plague, to see if other species used this S-thiolation switch on their proteins. They didn’t, suggesting that Salmonella had come up with this tactic during its own evolution.

The researchers speculate that Salmonella might use the smaller cysteine under stressed conditions as an energy saving device. Additional research will reveal what control functions the modifications are actually performing on the proteins.