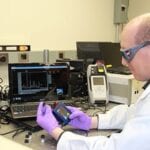 The primary goal of the branch is to conduct fundamental spectroscopic research as well as to test and evaluate systems that specialize in detection from proximal (sub 250 meters) to standoff (> 250 meters) distances. This ability is vital to a soldiers’ safety, as it can warn the soldier to don hazardous material clothing and protective equipment before being exposed to the chemical threat. It is essentially a capability to “detect to warn,” as most of the chemical agents cannot be seen with the naked eye, especially from a distance.

Raman spectroscopy is a scattering-based phenomenon that utilizes a single laser source. The laser light interacts with the molecules shifting the wavelength based on the molecular structure of the molecules, which in turn generates a spectral signature. Each signature of chemical or biological matter is unique, just like a fingerprint. These are then matched against the robust library of agents that ECBC has built over the years for identification of the agent.

Through their work with spectroscopy, the Laser Spectroscopy Branch has also identified potential issues of transitioning smaller portable instruments into the field, including the issue of the angle of the detector and how that affects its ability to yield accurate results. For many techniques, Raman in particular, traditional systems are ideally operated in a perpendicular manner.

“As systems have gotten smaller it is harder to predict how the soldier will hold it in their hands, or how an unmanned vehicle will have it positioned on its arm in respect to the sample,” said Jason Guicheteau, Ph.D., and ECBC scientist. To address this issue, a joint effort was coordinated and sponsored by the ECBC Engineering Directorate, ATD Branch and DTRA for the Laser Spectroscopy Branch to develop a model to test the angle dependence of the Raman Return, or spectral signature. Their findings yielded that in most cases chemical identification is unaffected between 0 to 60 degrees to normal.

This advanced testing all stemmed from one piece of equipment evaluated under the branch, and demonstrates why this kind of partnership between ECBC, DTRA, Joint Program Managers and industry is important.

“Companies know that we will put their systems through the most rigorous testing and help them develop the most effective, accurate technologies. It is a great give and take between the Army and the company,” said Guicheteau. “The company can ensure that they have a really good system before taking it to the next level to try to get it fielded. Most of the companies that come to us want detailed, constructive criticism and really want to improve their product. Plus, this shows that they are already partnering with the Army.”

Perhaps the most unique capability of the Laser Spectroscopy Branch is its Instrument Surety Assessment Suite (ISAS lab), for which a team of ECBC scientists retrofitted an existing lab and added a three-sided chemical hood. ECBC’s Mike Ellzy, Ph.D. and Darren Emge designed the lab, which allows for the testing of live agents from inside the hood and at standoff distances, with the ability to test multiple instruments at the same time.

Only ECBC personnel are allowed in the lab, but it boasts the unique capability of adjoining labs that can actually run the systems remotely, with communication devices that allow the scientists to talk freely with customers during testing.

“Our ISAS lab is a unique, one-of-a-kind facility,” said Guicheteau. “It allows for us to significantly elevate our level of testing. It has been swamped with work from both national and international customers.”