CERF-P Units Train to Save Civilians from CBRNE Disaster 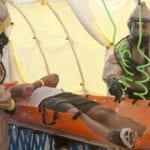 It’s another day at the office or a day off shopping on a busy street. There’s a boom, or a crash, you can’t tell which. Then there’s an odd pause followed by screaming. A blast crumbles the walls and ceiling around you. The next moment you are surrounded by rubble with just inches to breathe.

This is just one of many possible situations from which the Massachusetts National Guard trains to rescue civilians after an attack or natural disaster involving chemical, biological, radiological, nuclear or environmental factors.

The potential damage from an incident involving CBRNE factors is too great for just one unit to mitigate. That’s the reason about a dozen units from the Massachusetts National Guard, along with supporting security elements from the Vermont Army National Guard’s 86th Infantry Brigade Combat Team, contribute troops and equipment to the CBRNE Enhanced Response Force-Package.

“The CERF-P is a homeland security mission and the main emphasis of the CERF-P is massive casualty decontamination,” said Army 1st Lt. Tom Hohenstien, a platoon leader with the 272nd Chemical Company, Massachusetts Army National Guard, which performs a central function of the overall mission.

“Once we rally, we can assemble within 12 hours and start moving to a location in New England,” said Army Lt. Col. Mark E. Merlino, commander of the 79th Troop Command, Massachusetts Army National Guard, and commanding officer of the CERF-P, who throughout his career has been an Army engineer.

The CERF-P’s units operate together as a whole, working to rescue people from devastating circumstances. Since accomplishing the mission requires a high level of cooperation between all the units, the CERF-P conducts a rigorous three day training event, so the units can perfect their roles in the process.

This year’s training was conducted at Camp Hartell’s disaster training incident site in Windsor Locks, Conn., which provides service members an environment where they experience a sizable pile of concrete wreckage that could have once been a large building on a city street. The training becomes more realistic with role players hired for the exercise to play victims of chemical burns, lacerations and broken bones, injuries represented by quality makeup art fit for a horror film.

The training exercise begins with the 272nd Chemical Company and their assembly of collapsible tents used to decontaminate civilians and their fellow service members when they re-enter the safe zone after venturing out into the affected area.

The collapsible tents are specially designed for establishing a decontamination site anywhere, and they can be transported in 4-by-4 foot cubes when collapsed, according to Army Sgt. William Hurley, a team leader with the 272nd, and a welder from Lowell, Mass.

Hurley is one of many soldiers in the 272nd who not only assemble the tents and connect them with running water, but also run the tents like an assembly line, cleaning victims of contaminants as quickly as possible to prepare them for medical treatment.

They perform these tasks while completely sealed off with a strong adhesive from the outside air in a kind of personal sauna created by the protective suits and gas masks they wear. This gear can dramatically raise a soldier’s body temperature and may cause dehydration or heat stroke during hard labor. However, it’s a safer way for soldiers to effectively care for potentially contaminated victims of a CBRNE attack.

Once the decontamination site is established, a safe zone is cordoned off around the tents and guarded by soldiers from the Vermont Army National Guard’s 86th Brigade Special Troops Battalion and 1st Battalion, 102nd Infantry Regiment.

These soldiers wear the same gear to protect them from contaminants while securing a perimeter and ensuring that civilians who reach the decontamination zone on their own are assessed by a medic or nurse, also in protective gear, from the 102nd or 104th Medical Group of the Massachusetts Air National Guard.

Members of the 102nd and 104th use a system of triage similar to the one used by civilian medical staff, where colored tags let the physicians know who to treat first or who can’t be treated on site, said Air Force Maj. Angelina Russell of the 104th, who provides care based on the priority set by the medics in her group.

Airmen of the 102nd and 104th perform triage immediately upon a victim’s arrival from outside the decontaminated zone.

Those who can walk on their own are guided to be decontaminated and checked out at the medical tent by an Air Force physician or physician assistant. Those who can’t move on their own go through the same process, but through a specially designed tent with rollers and boards that resemble a conveyor belt.

Those same victims who couldn’t move on their own had to be found. The search and extraction teams are formed from soldiers of the 101st Engineer Battalion, the 179th and 180th Fire detachments, and airmen from the 102nd. They suit up and venture into the wreckage to locate and rescue anyone they find.

“As a collective whole, we are the search and extraction team for the state of Massachusetts for confined space and structural collapse,” said Army Sgt. Ryan Puzzo, a team leader for the 379th Engineer Company, 101st Engineer Battalion, and a student from Ashland, Mass., who led a team of soldiers and airmen in a lifting and hauling operation during the training event.

Search and extraction teams are trained to lead disoriented people who can walk back to the decontamination site, and when a victim is trapped under a collapsed structure, they are able to shore up and breach walls or lift and haul boulders so the medics can perform triage and tie them safely in a stretcher for evacuation to the decontamination tent.

“I think this is a great mission. We’re here to help out and support the local authorities. We train hard and when it’s time to do our mission I know we’re going to succeed,” said Merlino.

Image: Members of the 272nd Chemical Company perform their decontamination process in one of their specially designed collapsible tents on a role player acting as a victim of a chemical attack during a decontamination training exercise on Camp Hartell Monday, June 10, 2013. Soldiers and airmen from the 101st Engineer Battalion, the 179th and 180th Fire Detachments, 272nd Chemical Company, and the 102nd and 104th Medical Groups will go over the proper ways to conduct rescue and recovery, decontamination, and medical operations during a massive casualty event. These units, along with the 79th Troop Command, which provides command and control assets, make up the Chemical, Biological, Radiological, Nuclear, Environmental (CBRNE), Enhanced Response Force Package or CERF-P. The CERF-P’s mission is to provide assistance to local and state authorities during both natural and man-made disasters. (U.S. Army National Guard photo by Spc. Michael Broughey, 65th Public Affairs Operations Center, Massachusetts National Guard).