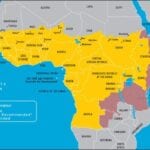 An emergency mass vaccination campaign against yellow fever is being launched next week in the Democratic Republic of Congo (DRC) following laboratory confirmation of six cases in the country to date. The campaign aims to cover at least 503,426 people in three affected health zones.

The six laboratory-confirmed cases included four patients in Lubao and one each from the Kamana and Ludimbi-Lukula zones. The patients were identified through the national surveillance program for yellow fever.

The laboratory confirmation was done by the Institute Pasteur in Dakar, Senegal, a WHO regional reference laboratory for yellow fever.

Preliminary outbreak investigation revealed that the index case is a 16-year-old boy from Kisengua village in the Lubao Health Zone who became ill on March 1, 2013. The outbreak investigation team has also identified 51 suspected cases including 19 deaths, in the three health zones. Serum samples have been taken from 13 patients and are being analyzed in the Institute National of Biomedical Research (INRB).

The International Coordinating Group on Yellow Fever Vaccine Provision will provide 559,000 doses of yellow fever vaccine for the mass vaccination campaign run by the Ministry of Health in DRC, with support from the GAVI Alliance, Medicins Sans Frontiers and other partners. WHO is closely supporting the management of the outbreak in monitoring, preventive and control activities in the field, and resource mobilization.

There are an estimated 200,000 cases of yellow fever causing 30,000 deaths worldwide each year. Small numbers of imported cases occur in countries free of yellow fever.

According to WHO estimates, 31 countries in Africa with a total population of over 508 million are considered to be at varying levels of risk for yellow fever. Major outbreaks occurred in Uganda in 2011 and South Sudan in 2003.