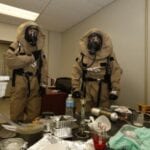 The scenario was the conclusion to a weeklong training with a mock real-world terrorist laboratory where the Marines evaluated and sampled products and variables to discover the intent of the lab. The training was also conducted to evaluate the unit’s assessment and consequence management capabilities.

“It’s the ACM set or suite that gives us the capability of consequence management,” said Sgt. Jeremy Wright, incident commander and the Marine Air-Ground Task Force CBRN assessment and consequence management noncommissioned officer in charge. “This ACM set is a newer capability for the Marine Corps that has been around for awhile but is now being employed more heavily.”

The first team entered the facility in a Class 2 ensemble and cleared each room checking oxygen content, combustion levels, and providing the first eyes on the lab for a sight picture for the incident commander.

The suits and gear combined raised their body temperatures an additional 15 degrees on top of an already hot day.

“It is high pressure inside the suit and your critical thinking skills are diminished,” said Wright. “Like when Marines go through the gas chamber and you can watch and see Marines thinking skills diminish from the basic MOPP suit. Now imagine having to try to do mental agility or dexterity drills.”

Lance Cpl. Dakota Robinson, a CBRN clerk, said wearing the suit and going through a lab like this for the first time was difficult. “When I came into the room I saw a pink vile and I was stuck on it,” said Robinson. “In those suits you can’t really think straight. That training was exactly what you would see deployed, if not worse. Hindsight is 20/20 and I know now that when I’m going through this I need to slow down and not try to speed through.”

Wright’s mission was to take all the information coming back from the reconnaissance Marines and use it to direct to the next wave.

“Not knowing anything about what the lab contained, I was directing the entry team and remaining personnel,” said Wright.
“This lab could have been anything so I wanted them to find out what the end product was and get them to relay that information back.”

“Anytime you see a HAZMAT truck or someone wearing a HAZMAT suit, their focus is on TICs and TIMs,” said Wright. “It’s our job to be the military equivalent of a civilian HAZMAT team. We will not respond to a chemical leak out in town but with this ACM set, we are able to be a part of a Marine Expeditionary Unit and respond to an overseas threat to the public or forces.”

In total, four teams went in to get eyes on the lab.

At the end, all teams and all personnel walked through the scenario to see the difference between what was actually there and what was explained to the incident commander.

During their debrief the Marines talked about how important it was to not get tunnel vision and be able to properly give the incident commander a picture of what’s going on. They discussed the importance of checking gear and why they bring each piece. They covered the importance of keeping an eye on their team members, and why they need to slow down to get the job done right the first time.

Several Marines training during the scenario were also preparing for the upcoming deployments with the 22nd MEU, 24th MEU and to Afghanistan.

“This training has really helped us a lot,” said Robinson. “This lab was spot on and has helped open our eyes to what could be out there waiting for us.”