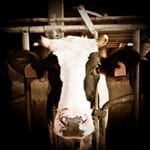 Humans have been raising cows for their meat, hides and milk for millennia. Now it appears that the cow immune system also has something to offer. A new study led by scientists from The Scripps Research Institute (TSRI) focusing on an extraordinary family of cow antibodies points to new ways to make human medicines.

“These antibodies’ structure and their mechanism for creating diversity haven’t been seen before in other animals’ antibodies,” said Vaughn V. Smider, assistant professor of cell and molecular biology at TSRI and principal investigator for the study, which appeared as the cover story in the June 6, 2013 issue of the journal Cell.

Antibodies, part of our immune system, are large proteins that resemble lobsters—with a tail and two identical arms for grabbing specific targets (called “antigens,” often parts of bacteria or viruses). At the business end of each arm is a small set of protein loops called complementarity-determining regions or CDRs, which actually do the grabbing. By rearranging and mutating the genes that code for CDRs, an animal’s immune system can generate a vast and diverse population of antibodies—which collectively can bind to just about any of the body’s foreign invaders.

In humans and in many other mammals, most of an antibody’s specificity for a target is governed by the largest CDR region, CDR H3. Researchers have been finding hints that an unusually long version of this domain can sometimes be the key to a successful defense against a dangerous infection. For example, in a study reported in Nature last August, Ian A. Wilson, who is Hansen Professor of Structural Biology and chair of the Department of Integrative Structural and Computational Biology at TSRI, and collaborators isolated an anti-influenza antibody with a long CDR H3 region—twice normal length—which allows it to grab a crucial structure on the virus and thereby neutralize the infectivity of several influenza subtypes.

Waithaka Mwangi, assistant professor in the Texas A&M College of Veterinary Medicine and Biomedical Sciences (CVM) and an author on the Cell paper, suggests thinking of these long CDRs as a probe on a thin extended scaffold that can fit narrow crevices to reach and bind unique hidden pathogen determinants that ordinary antibodies cannot.

Reports on these antibodies recently caught the interest of Smider, whose area of research includes finding new ways to generate therapeutic antibody proteins. “We started thinking about how we could make these long CDR3s that are so rare in humans, and we knew from the literature that cows make even longer ones all the time,” he said.

To investigate, Smider assembled a collaboration that included the TSRI laboratories of Wilson and Peter G. Schultz, who is the Scripps Family Chair Professor of Chemistry, as well as researchers at CVM. Michael F. Criscitiello, assistant professor at the CVM and a co-author of the paper, embraced the chance to contribute to the groundbreaking study and noted researchers at CVM offered key immunology proficiency with—and access to—cows. “Such collaborations bring together specialists in diverse fields and certainly facilitate future research,” added Terje Raudsepp, associate professor at the CVM and another of the study’s authors.

The team performed a detailed structural and sequence analysis of these unusually long CDR H3 cow antibodies, to gain insight into how they are made naturally—and how such structures might be engineered in the laboratory.

Co-first author Feng Wang, at the time a research associate with Schultz and Smider at TSRI, led the effort to purify long CDR H3 cow antibodies—which represent about 10 percent of the cow antibody repertoire—and analyze their corresponding gene sequences. Co-first author Damian C. Ekiert, at the time a graduate student in the Wilson laboratory at TSRI, was able to crystallize the long CDR H3 antibody samples and determine the 3D atomic structures of two representative antibodies by X-ray crystallography.

Although various structures of  long CDR H3 protein in Wilson’s human anti-influenza and anti-HIV-1 antibodies had seemed unusual, the corresponding structure in the cow antibodies turned out to be unique in the known world of animal antibodies: a long “stalk” element topped by an antigen-binding “knob” that was made up from the over 60 amino acid CDR H3. Sequencing of the DNA that codes for the knob region revealed an unusual abundance of cysteine—a sulfur-containing amino acid that is apt to bond to a nearby cysteine on the same protein chain, thus forming a loop.

Analyses of these DNA sequences also indicated that, in the cow B-cells where these antibodies are made, the knob-coding gene segments are extraordinarily likely to develop point mutations that either add or subtract cysteines. The effect of these tiny mutations is to create or remove—often radically—antigen-grabbing loops on the structure. “This is a very efficient way to evolve new protein folds,” said Wang. Indeed, it seems to be the principal way in which the cow immune system creates a diverse set of these long CDR H3 antibodies.

In the cows, binding of these antibodies to viruses is almost entirely done by the knob on the long CDR H3, which shows that these antibodies do have an important function in the immune system. “For the very first time, we have an ultra-long CDR3 antibody binding to an actual pathogen,” said Mwangi.

One question that remains is why the cow immune system evolved to make such antibodies. Smider suspects that it has to do with cows’ unusual, four-chambered, grass-fermenting stomach, with its extensive collection of bacteria and other microorganisms. “If some of these escape from the stomach and get into the bloodstream or other tissues, there could be some pretty serious infections; so that’s our starting hypothesis for why cows have this unusual immune defense,” he said.

The stalk-and-knob structure of the CDR H3 loops on these antibodies, which resemble structures found in some insect poisons and other proteins, also suggest that they evolved to grab a particular type of target. “What comes to mind are ion channel or pore structures in the walls of cells,” Smider said. “In any case, we’re hoping to find out whether any of the structures targeted by these knobs exist on microorganisms that cause human disease.”

Smider, Schultz, and Wang, who now has his own laboratory at the California Institute for Biomedical Research (CALIBR), hope to harness the potential power of long CDR H3 antibodies for a wide variety of human—and perhaps also veterinary—medical applications. “One approach we’re taking is to immunize cows with antigens of interest to see if we can recover antibodies that neutralize the antigens using these elongated CDR H3 proteins,” said Wang.

Another approach, said Smider, is to generate extensive “libraries” of long CDR H3 antibodies in the laboratory and select for those antibodies that have a desired effect. Fabrus Inc, a company founded by Smider and whose scientists were collaborators on the study, is building these libraries for therapeutic discovery. CALIBR, founded by Schultz to translate scientific findings into medicines, also is investigating the possibility of replacing the knob region of such antibodies with known therapeutic proteins to increase their stability and potency.

“It’s somewhat rare in science that you find something so unexpected and then have the opportunity to study it in depth—and then get to develop real biomedical applications from it,” Smider said.