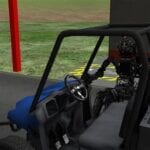 The goal of the Defense Advanced Research Projects Agency (DARPA) Robotics Challenge is to advance technology and innovation so that in the future, robots can work in tandem with human counterparts to respond to hazardous events in order to reduce casualties.

The Virtual Robotics Challenge (VRC) is a cloud-based task involving simulation of the robot walking to, entering and driving a utility vehicle along an obstacle course, then exiting the vehicle and walking through a final checkpoint. Teams are assessed on effective operator control and the robot perception and locomotion.

The first event, whose seven winners were announced June 27, was a software competition among 26 teams from eight countries.

The teams competed against each other using a virtual robot called Atlas inside the DARPA Robotics Challenge Simulator, an open-source tool created for DARPA by the Open Source Robotics Foundation.

A company called Boston Dynamics is using DARPA funding to build real Atlas robots that the winning teams have been awarded to use in upcoming DARPA challenges.

“We believe it’s important to develop robots that can go into areas that are too dangerous for people and that can be supervised by human beings despite the fact that communications might be quite difficult [during a disaster] both between human beings and between people and robots,” said Dr. Gill Pratt, DARPA program manager.

Read the rest of the story at Armed with Science: DARPA Competitors Develop Robots for Disaster Response