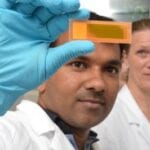 Diagnosing the presence of Yersinia pestis, the cause of plague, may soon be easier than ever before. Scientists from the Max Planck Institute of Colloids and Interfaces (MPIKG) and the Freie Universität have come up with a simple, inexpensive and reliable method of detecting the bacterium.

In order to specifically detect the plague pathogen, the scientists first had to identify an oligosaccharide in a lipopolysaccharide on the surface of Yersinia pestis. This oligosaccharide would serve as a specific antigen. They then synthesized the complex compound in a multi-step process. The chemists then bound the sugar molecule to a protein that is used in many vaccines to heighten the immune reaction. The resulting glycoprotein produced by the sugar-protein compound was used to trigger an immune reaction in mice. The scientists used this circumstance to create antibodies to the plague pathogen using murine immune cells.

The antibodies can identify plague bacteria with high accuracy without the result being distorted by other bacteria biochemically related to plague. The antigen-antibody complexes are very easy to detect with fluorescing proteins.

The Black Death is best known as a devastating medieval disease which affected Europe, Central Asia and China. The plague killed more than 200 million people through the ages. Yet it is by no means completely eradicated. In 2002 there was an outbreak of plague in the Indian state of Himachal Pradesh, and 2008 saw 18 cases reported in Madagascar. Ziketan, a city in north-west China, was quarantined after an outbreak in 2009, and in the same year there were 16 cases in Tobruk, Libya. Cases are also repeatedly reported in New Mexico, USA. As it is extremely infectious and indeed deadly, plague is one of the most dangerous bioweapons.

Adapted from press release by: Max-Planck-Gesellschaft