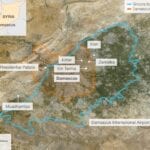 Video footage of the immediate aftermath of the rocket attack Wednesday on people in the suburbs of Damascus shows the most compelling evidence yet of the Assad government employing some type of chemical weapons against rebel forces.

The victims show no visible wounds from gunshots and display some signs of toxic gas: suffocation, blurred vision and salivating. But more classic nerve warfare symptoms of vomiting, defecation and tremors were not evident, leading some to theorize toxic industrial chemicals were utilized.

Skeptics say the timing is suspicious, given the gains the Assad government has made recently and the arrival of UN weapons inspectors in the country on Sunday. Russian officials accused the rebels of staging the attack to implicate the government.

UK Foreign Secretary William Hague said that if confirmed the attacks would mark a “shocking escalation in the use of chemical weapons in Syria”, according to BBC.

While many nations have called for the UN inspectors to immediately investigate these events, it was not clear whether the team would be allowed access by the Assad regime. The UN personnel only arrived Sunday after months of tenuous negotiations with the Syrian government and are authorized to visit three predetermined sites.