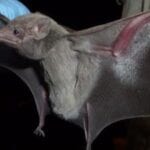 A 100% genetic match for Middle East Respiratory Syndrome (MERS) has been discovered in an insect-eating bat in close proximity to the first known case of the disease in Saudi Arabia. The discovery points to the likely animal origin for the disease, although researchers say that an intermediary animal is likely also involved.

Led by team of investigators from the Center for Infection and Immunity (CII) at Columbia University’s Mailman School of Public Health, EcoHealth Alliance, and the Ministry of Health of the Kingdom of Saudi Arabia, the study is the first to search for an animal reservoir for MERS in Saudi Arabia, and the first to identify such a reservoir by finding a genetic match in an animal. Results appear online in Emerging Infectious Diseases, a journal of the U.S. Centers for Disease Control and Prevention.

“There have been several reports of finding MERS-like viruses in animals. None were a genetic match. In this case we have a virus in an animal that is identical in sequence to the virus found in the first human case. Importantly, it’s coming from the vicinity of that first case,” says W. Ian Lipkin, MD, director of the Center for Infection and Immunity and a co-author of the study.

MERS was first described in September 2012 and continues to spread. Close to 100 cases have been reported worldwide, 70 of them from Saudi Arabia. The causative agent, a new type of coronavirus, has been determined; however, the origin of the virus has been unknown until now.

Over a six-week period during field expeditions in October 2012 and April 2013, the researchers collected more than 1,000 samples from seven bat species in regions where cases of MERS were identified in Bisha, Unaizah, and Riyadh. Extensive analysis was performed using polymerase chain reaction and DNA sequencing revealed the presence of a wide range of alpha and beta coronaviruses in up to a third of bat samples. One fecal sample from an Egyptian Tomb Bat (Taphozous perforatus) collected within a few kilometers of the first known MERS victim’s home contained sequences of a virus identical to those recovered from the victim.

Bats are the reservoirs of viruses that can cause human disease including rabies, Hendra, Nipah, Marburg, and SARS. In some instances the infection may spread directly from bats to humans through inadvertent inhalation of infected aerosols, ingestion of contaminated food, or, less commonly, a bite wound. In other instances bats can first infect intermediate hosts. The researchers suggest that the indirect method for transmission is more likely in MERS.

“There is no evidence of direct exposure to bats in the majority of human cases of MERS,” says Ziad Memish, MD, Deputy Minister of Health, Kingdom of Saudi Arabia, and lead author of the study. “Given that human-to-human transmission is inefficient, we speculate that an as-yet-to-be determined intermediate host plays a critical role in human disease.”

“We are continuing to look for evidence of the virus in wildlife and domestic animals, and investigating the mechanisms by which the virus causes human disease,” adds Dr. Lipkin. “This is but the first chapter in a powerful collaboration amongst partners committed to global public health.”

In the coming days, the group will be reporting the results of its investigation into the possible presence of MERS in camels, sheep, goats, and cattle.

Read the study at Emerging Infectious Diseases: Coronavirus diversity and evidence for MERS-CoV infection in bats in Saudi Arabia.

Image: Egyptian Tomb Bat (Taphozous perforatus) being examined by researchers. One of this type of bat was found to have Middle East Respiratory Syndrome in a study in Saudi Arabia. Credit: Jonathan H. Epstein/EcoHealth Alliance

Small Cluster of Pneumonia Cases in Argentina Identified as Legionella