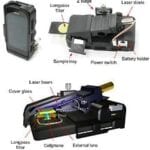 Researchers developed a lightweight microscope that attaches to a cell phone. The compact fluorescent imaging device can detect single nanoparticles and viruses. It might one day be used to conduct biomedical tests in remote and resource-limited areas.

Visualizing a virus, or other structures that exist on a nanoscale level, typically requires expensive, sophisticated microscopes. These microscopes have bulky lenses and specialized optical components that are difficult to scale down and implement in a small, portable device. Such a compact device, though, could have enormous health benefits. For instance, it might allow researchers to track viruses and perform other diagnostic tests in the field.

A team led by Drs. Qingshan Wei and Aydogan Ozcan of the University of California, Los Angeles, sought to overcome the many challenges involved in building a compact, lightweight, fluorescent microscope that can detect single particles on a nanoscale level. Their work was funded in part by an NIH Director’s New Innovator Award.

Using a 3-D printer, the researchers constructed a handheld component that could attach to a smartphone. For a light source, they used a compact blue laser diode that was powered by 3 AAA batteries. They positioned the laser to illuminate a sample at a steep, oblique angle. This prevented the background light that could interfere with the detection of signal from the samples. The device also included a specialized filter to further block background noise in the images. The scientists described the construction and testing of the device online on September 9, 2013, in the journal ACS Nano.

Specimens were positioned in a sample holder on a miniature mechanical stage that could be moved to adjust the depth and focus. Both the sample and laser source were housed in a unit that prevented the user from being exposed to laser light and enabled samples to be viewed in the presence of strong ambient light. This “opto-mechanical” attachment weighed less than half a pound.

The researchers tested the device by viewing fluorescent beads. They could detect beads as small as about 100 nm. They were also able to view fluorescently labeled human cytomegaloviruses, which range from 150 to 300 nm in diameter. They confirmed the ability of the device to detect nanoscaled objects of varying brightness by viewing the same samples with conventional scanning electron microscopy and confocal microscopy.

“This cellphone-based imaging platform could be used for specific and sensitive detection of sub-wavelength objects, including bacteria and viruses, and therefore could enable the practice of nanotechnology and biomedical testing in field settings and even in remote and resource-limited environments,” Ozcan says.