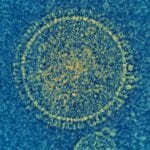 An experimental vaccine to protect against respiratory syncytial virus (RSV), a leading cause of illness and hospitalization among very young children, elicited high levels of RSV-specific antibodies when tested in animals, according to a recent report in the published in the journal Science. Early-stage human clinical trials of the candidate vaccine are planned.

Scientists from the Vaccine Research Center (VRC), National Institute of Allergy and Infectious Diseases (NIAID), part of the National Institutes of Health, built on their previous findings about the structure of a critical viral protein to design the vaccine.

In the United States, RSV infection is the most common cause of bronchiolitis (inflammation of small airways in the lungs) and pneumonia in children less than one year old and the most common cause for hospitalization in children under five. Worldwide, it is estimated that RSV is responsible for nearly 7 percent of deaths in babies aged 1 month to 1 year; only malaria kills more children in this age group. Others at risk for severe disease following RSV infection include adults over age 65 and those with compromised immune systems.

“Many common diseases of childhood are now vaccine-preventable, but a vaccine against RSV infection has eluded us for decades,” said NIAID Director Anthony S. Fauci, M.D. “This work marks a major step forward. Not only does the experimental vaccine developed by our scientists elicit strong RSV-neutralizing activity in animals, but, more broadly, this technique of using structural information to inform vaccine design is being applied to other viral diseases, including HIV/AIDS.”

Earlier this year, the VRC team obtained atomic-level details of an RSV protein—called the fusion (F) glycoprotein—bound to a broadly neutralizing human RSV antibody. The protein-antibody complex gave scientists their first look at the F glycoprotein as it appears before it fuses with a human cell. In this pre-fusion shape, F glycoprotein contains a region vulnerable to attack by broadly neutralizing antibodies (antibodies able to block infection from the common strains of RSV).

Once RSV fuses with a cell, this vulnerable area, named antigenic site zero by the researchers, is no longer present on the rearranged F protein. In natural RSV infection, the immune system produces antibodies against both the pre-fusion and post-fusion forms of F glycoprotein, but the antibodies to antigenic site zero, which is only present on the pre-fusion form, have much stronger neutralizing activity. Therefore, a vaccine against RSV would have greater chance of success by eliciting antibodies directed at F glycoprotein in its pre-fusion configuration.

In their current publication, Drs. Kwong and Graham describe how they used this structural information to design and engineer F glycoprotein variants that retained antigenic site zero even when no antibody was bound to it. The goal was to create stable variants that could serve as the foundation for a vaccine capable of eliciting a potent antibody response. The researchers designed more than 100 variants; of these, 3 were shown by X-ray crystallography to retain the desired structure. The engineered variants were then used as vaccines in a series of experiments in mice and rhesus macaques.

In both mice and macaques, the researchers found that the more stable the protein, the higher the levels of neutralizing antibodies elicited by vaccination. The levels of antibody made in response to one of the engineered F glycoproteins were more than 10 times higher than those produced following vaccination with post-fusion F glycoprotein and well above levels needed to protect against RSV infection.

“Here is a case in which information gained from structural biology has provided the insight needed to solve an immunological puzzle and apply the findings to address a real-world public health problem,” said Dr. Graham. He and the VRC scientists are continuing to refine the engineered F glycoproteins and hope to launch early-stage human clinical trials of a candidate RSV vaccine as soon as clinical grade material can be manufactured, a process that takes about 18 to 24 months to complete.

“Previously, structure-based vaccine design held promise at a conceptual level,” said Dr. Kwong. “This advance delivers on that promise and sets the stage for similar applications of structure-guided design to effective vaccines against other pathogens.”

Dr. Fauci added, “This latest advance underscores the advantages of the VRC’s organizational design, where experts in RSV virology, vaccinology and clinical studies, such as Dr. Graham, are in daily contact with Dr. Kwong and others who are experts in structural biology. Such close collaboration across disciplines allows for rapid testing of new approaches to a given problem.”