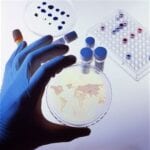 The research and development spending in the United States dropped from $131 billion to $119 billion, when adjusted for inflation, from 2007-2012, while Japan increased spending by $9 billion and China increased by $6.4 billion. Overall, Asia’s share of spending grew from 18 percent to 24 percent. Europe held steady at 29 percent.

Prior analyses have suggested the United States’ share of global expenditures were once as high as 80 percent.

Results of this new analysis, conducted by researchers from industry and academia, including both medical researchers and economists, appeared this month in the New England Journal of Medicine.

“The United States has long been a world leader in driving research and development in the biomedical science. It’s important to maintain that leadership role because biomedical research has a number of long term downstream economic benefits, especially around job creation,” says study author Reshma Jagsi, M.D., D.Phil., associate professor of radiation oncology at the University of Michigan Health System.

Despite reductions in funding from the National Institutes of Health, including a 20 percent drop in purchasing power since 2003, the researchers discovered that the United States’ decline was driven almost entirely by reduced investment from industry, not the public sector. This includes support for clinical trials testing potential new therapies.

Jagsi suggests that this may boil down to fewer regulations and less expense to conduct research in Asia – labor costs less, government may be offering subsidies and the research infrastructure is not as bureaucratic as it is in the United States.

“We were surprised the impact of industry funding was that dramatic, but it’s key to note that government funding is equally important to maintain or grow. Research funded through the National Institutes of Health helps scientists understand how diseases work – this will happen slower as NIH funding continues to be cut,” says study author Justin Chakma, a venture capital investor with Thomas, McNerney & Partners in La Jolla, Calif.

Historically, about half of drugs approved by the U.S. Food and Drug Administration had some federal government funding during the course of the research and development.

The authors note the critical need for increased NIH funding coupled with incentives to industry for investing in biomedical research and development here. They call the lack of a coordinated national biomedical R&D strategy “disappointing.”