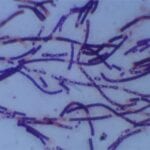 Scientists at the University of Missouri’s Laboratory of Infectious Disease Research have proved a new method for anthrax detection can identify anthrax quicker than existing approaches. When their “bioluminescent reporter phage” — an engineered virus — infects anthrax bacteria, it takes on a sci-fi-movie-type glow.

“For this technique, within a few hours, you’ll have a yes or no answer,” Stewart said. The phage, developed by David Schofield at Guild BioSciences, a biotech company in Charleston, S.C., is injected in the sample causing anthrax to glow if present. This new method could save a significant amount of money associated with the decontamination of anthrax from suspected infected areas.

Theoretically, the new detection method would alert of a negative result potentially five hours into clean-up efforts instead of two or three days into expensive decontaminating. Current methods take anywhere from 24 hours or longer to produce a definitive answer for anthrax contamination.

Prior to this bioluminescent reporting phage, experts used techniques that were culture based or PCR (polymerase chain reaction) based. Both methods require additional time for a definitive answer, a minimum of 24 to 48 hours, Stewart said.

“Normally to identify whether an organisms is present, you have to take the material culture, the organism and all the bacteria that might be present in the sample,” Stewart said. “You have to pick colonies that might be bacillus anthracis and do chemical testing which takes some time.”

From a bio-threat standpoint, breathing in anthrax, is the highest concern for public health and homeland security officials and has the highest fatality rate among forms of anthrax. “If you have a situation and need a quick yes or no answer, this is a tool that will help that,” Stewart said.

The bioluminescent-detection method can detect low levels of anthrax bacteria and rule out false positives. The added benefit to this reporting system is its ability to show that anthrax bacteria are present and it’s alive, Stewart said.

The next step for the research team at MU and Guild BioSciences will be to get the bioluminescent reporter phage approved by federal regulatory agencies so a product can be produced and distributed, Stewart said.

The research, “Bacillus anthracis diagnostic detection and rapid antibiotic susceptibility determination using ‘bioluminescent’ reporter phage” was funded by the USDA and published in the Journal of Microbiological Methods.

Source: Adapted from University of Missouri