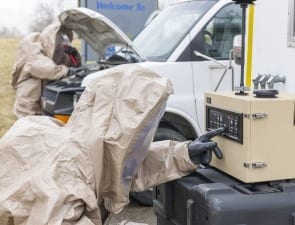 REBS is a ruggedized battery-powered system capable of autonomous and continuous use with operating costs of less than $1 per day per unit and assay costs of just $0.04 per sample. The cost savings come from Battelle’s new “smart technology” that eliminates the need for perishable reagents. Instead, REBS relies on a combination of patented aerosol collection and optical spectroscopy to detect hundreds of threats ranging from bacteria, viruses and toxins to aerosolized chemicals, and even mixed threats.

“Our warfighters, first responders, security personnel, and many in industry, need an affordable, reliable, high tech detection system capable of identifying new biological and chemical materials quickly, no matter the environment. REBS is that solution,” said Matthew Shaw, vice president and general manager of the CBRNE Defense business unit of Battelle. “Its elegant, automated design eliminates the need for constant maintenance and support, saving an estimated $56 million for every 1,000 units.”

According to Battelle, REBS has been demonstrated in multiple government and independent trials, including successful operational testing in the Boston subway and, separately, successful developmental testing with “live” biological agents, such as anthrax spores, in 2013.

The system’s “smart tech” capability preserves samples for subsequent confirmation, is network-ready, and is able to look for new or emerging threat materials within 24 hours of their identification. Samples are automatically preserved and archived, providing seamless integration into high-level bio-surveillance operations at home or abroad.

REBS can be installed in a fixed site or used in mobile applications; as a single device or as an array of hundreds of systems configured into a network to a single command post. The system can be operated, monitored, and updated via the internet.

Battelle spearheaded development of the military’s current automated bio-detection system, the Joint Biological Point Detection System (JBPDS), in the 1990s in response to the U.S. Army’s call for a reliable and automated way to detect and identify biological weapon threats. Today, there are roughly 700 JBPDS deployed worldwide, from Navy ships to the Stryker NBCRV and the M31A2 Biological Integrated Detection System, each containing bio-suite components manufactured by Battelle.