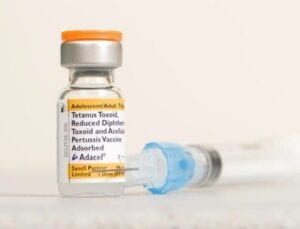 Conventional wisdom holds that when the risk of catching a disease is high, people are more likely to get vaccinated to protect themselves. This may not be the case, however, according to a study presented today at the Pediatric Academic Societies (PAS) annual meeting in Vancouver, British Columbia, Canada.

Researchers, led by Elizabeth R. Wolf, MD, FAAP, compared rates of infant vaccination with the diphtheria, tetanus and pertussis vaccine (DTaP) before and during an epidemic of pertussis (whooping cough) in Washington state. Surprisingly, they found no difference in vaccination rates.

“We have always assumed that when the risk of catching a disease is high, people will accept a vaccine that is effective in preventing that disease. Our results may challenge this assumption,” said Dr. Wolf, the Ruth L. Kirschstein National Research Service Award Fellow in General Academic Pediatrics at University of Washington, Seattle Children’s Research Institute.

Washington state experienced a pertussis epidemic from Oct. 1, 2011, through Dec. 31, 2012, and infants were hit the hardest. The highly contagious bacterial disease causes uncontrollable, violent coughing that can make it hard to breathe. Pertussis also is known as whooping cough because a “whooping” sound often is heard when the patient tries to take a breath. Pertussis can lead to pneumonia, seizures (jerking and staring spells), brain damage and death.

Dr. Wolf and her colleagues compared the proportion of 3- to 8-month-olds who had received the recommended number of doses of pertussis-containing vaccine before the epidemic and during the epidemic. Infants who received at least one dose by 3 months of age, at least two doses by 5 months and at least three doses by 7 months are considered up to date by the Advisory Committee on Immunization Practices of the Centers for Disease Control and Prevention.

“Vaccination rates in the U.S. are still below public health goals,” Dr. Wolf noted. “We don’t fully understand what improves vaccine acceptance. This study found no significant increase in vaccination coverage statewide during the 2011-2012 pertussis epidemic. This finding may challenge the assumption that vaccine acceptance uniformly increases when risk of disease is high.”

The study was funded by a grant from the National Institutes of Health.